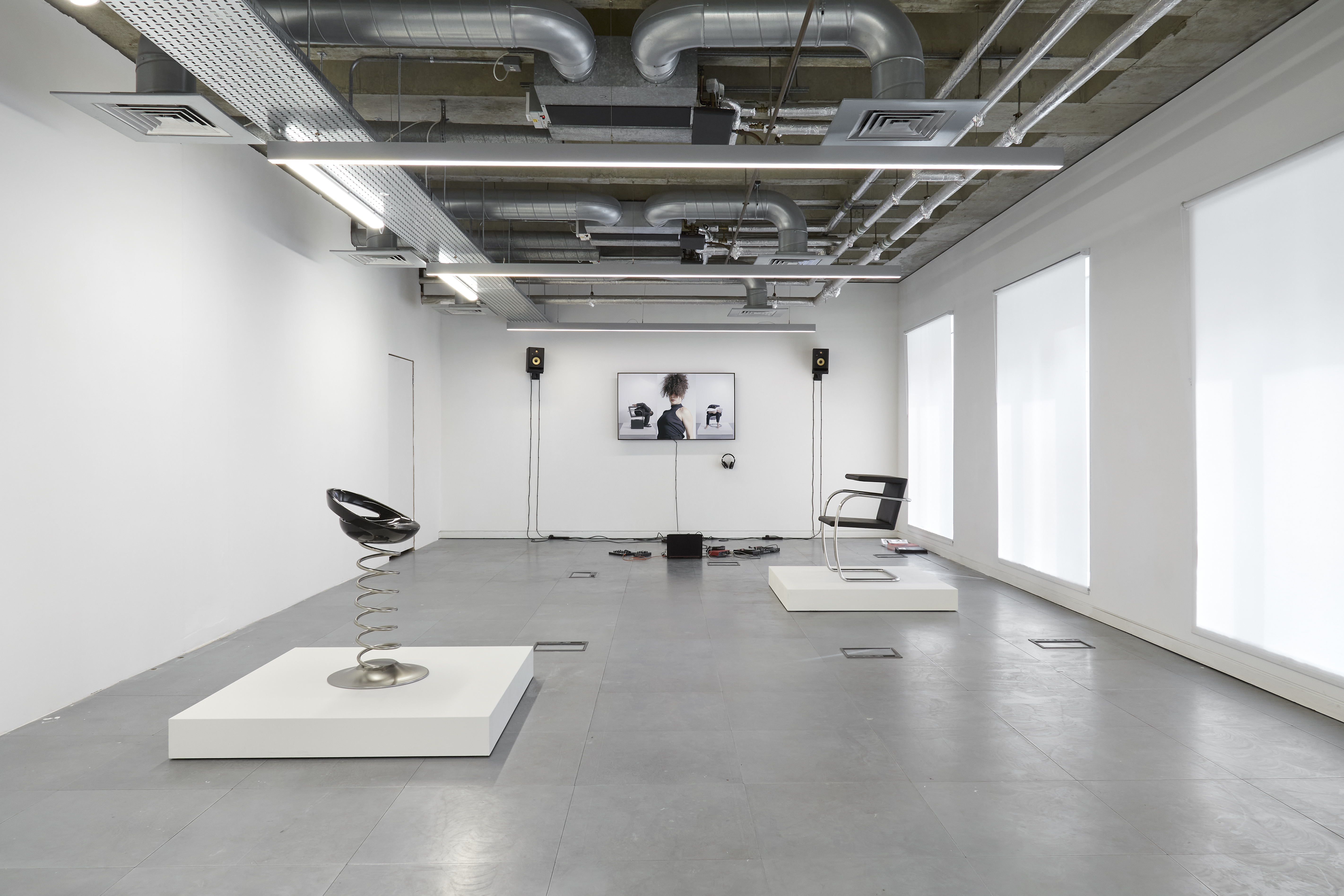 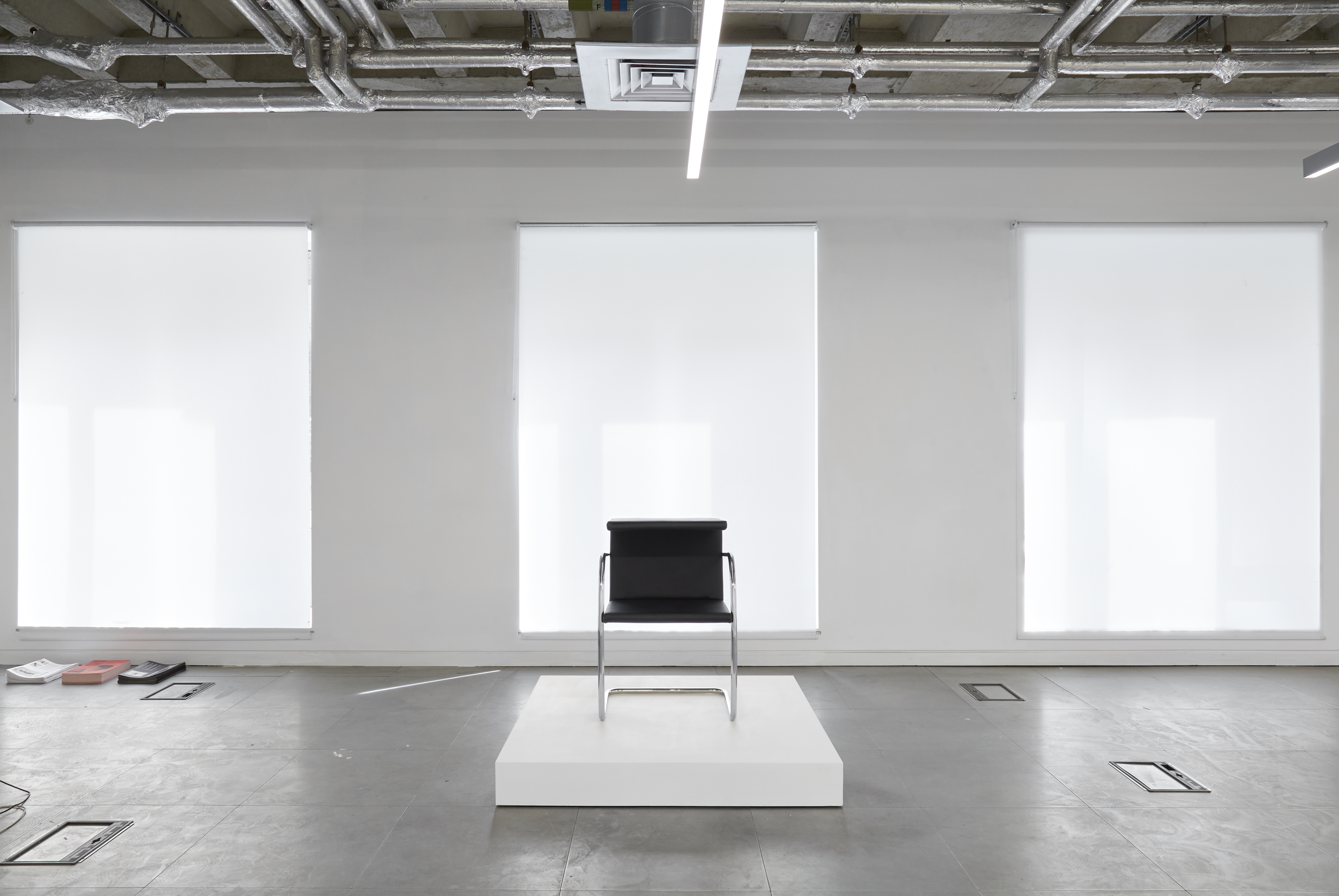 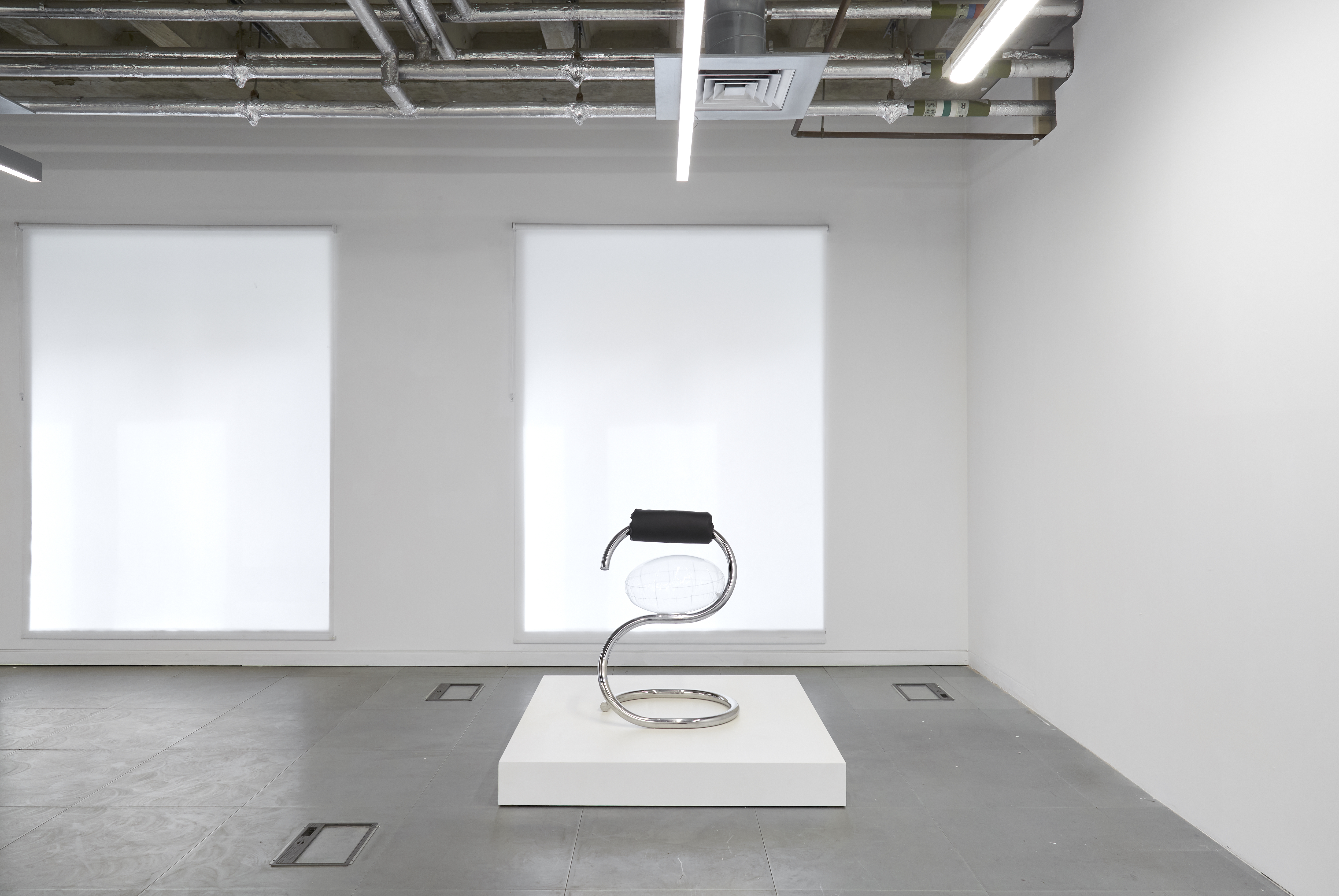 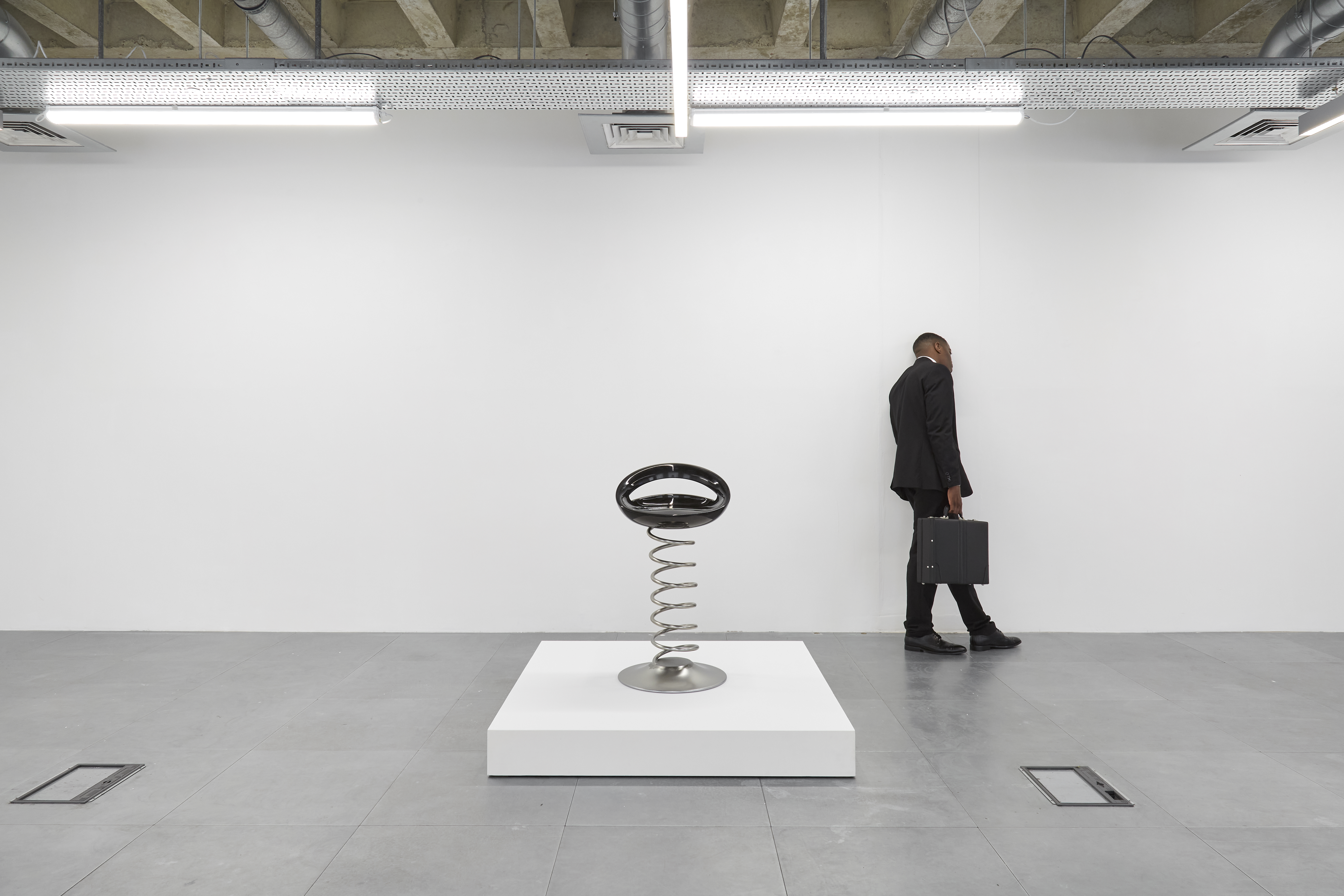 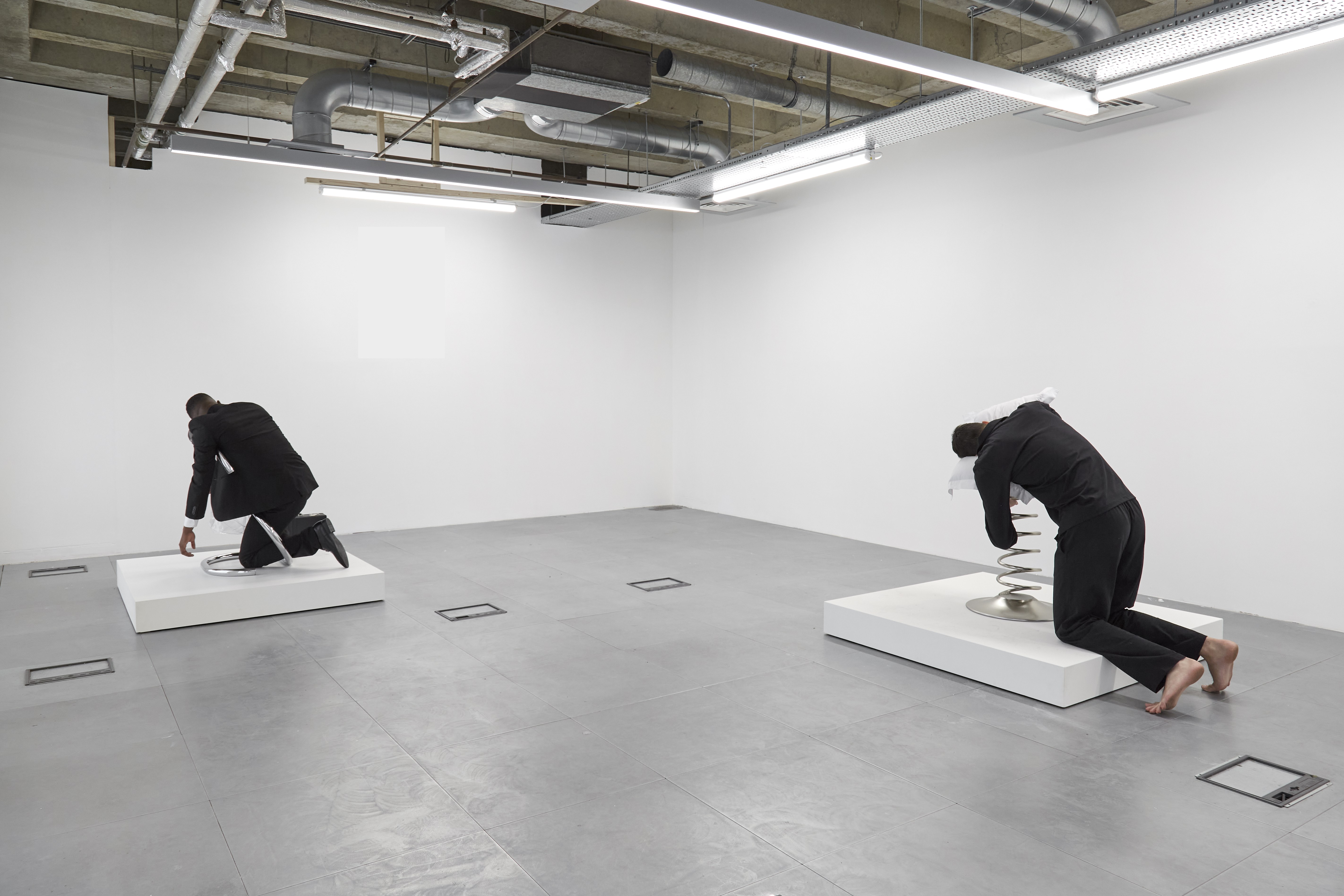 London-based Chinese artist Hongxi Li presents SHAPED, her second solo exhibition in London curated by Martin Mayorga and Vanessa Murrell of DATEAGLE ART at V.O Curations. In addition to three new sculptures created specifically for the exhibition in 2022, she debuts a performative activation of her “chairs,” a scent, a soundscape, and a video installation. In this new body of work displayed in a former office building, Li examines the dreary “cyclical pattern” of going from work to bar then home that reflects what urban office workers endure in their daily lives.

For the past two years, Li has made sculptures that resemble chairs and appear mass-produced, but are handcrafted using brand name designer furniture. Through their alteration, she reflects on the history of the furniture and restricts their intended functionality. The exhibition’s title, SHAPED, refers to the awkwardness of the subjects that are lounging on her defective chairs, suggesting a need to adapt to power structures. 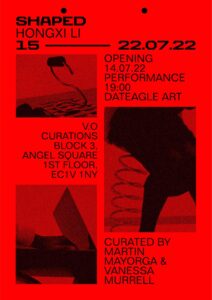 In line with the window frame at the entrance of the exhibition, is the executive At Work chair, a re-working of the original 1930s Brno chair designed by German architect Ludwig Mies van Der Rohe. From Li’s Bow series (2020-ongoing) of curved-back chairs, the chair requires the occupant to painfully bend in half to sit in it. This stiffness created a shrugging posture that is bent in submission and reminiscent of the ancient Chinese custom of Kowtow (approx. 771–221 BC), an act of deep respect shown by kneeling and bowing so low as to have one’s head touching the ground. Oriented backwards, the bouncy At Bar chair extends her Uncertainty series (2021-ongoing) of motion-driven chairs. Replacing the solid pole of a 2000s Crescent bar stool with a large steel spring, the artist creates an unsteady piece that mimics a night out’s tumult. The first from Li’s Exhaustion series (2022-ongoing) of chairs with inflatable-seats, the final At Home chair re-interprets Italian architect Giotto Stoppino’s 1970s Cobra chair. The seat is substituted by an air cushion that gradually deflates with the weight of the sitter, simulating an irreversible fatigue.

Developed in collaboration with incense maker Junior Adesanya of Cremate London, Active Breeze is a scent derived from natural oils like pine, rosemary and cedar. It emits an impure and industrial odour, much like the artificial fresheners often used in public places to conceal undesirable smells.

The audio work, Angel Landscape, was produced in collaboration with London-based singer and songwriter Magnus Brandt by combining local field recordings collected during the day and at night. The sonic atmosphere is heavily filtered, creating the illusion of subdued white noise when it is actually frenetic London traffic, frantic chatter and incessant notifications. On a cluttered cable maze wall upon exit and entry, the audio on headphones discerns the faraway sounds to the detriment of anxiety, thereby strengthening the awareness of one’s reality.

The audio complements the restless video installation Metropolitan Rhythm, an extension of the opening performance choreographed by Olive Hardy, who was recently awarded a Sadler’s Wells Theatre Young Associate (2020-21). In the 10-minute landscape screen, everyday movements are made absurd by the obscurely designed chairs. The footage is split into three sections, tailored to one single chair if viewed individually, but watched in tandem reveal how each performers’ movement corresponds. The performers portray characters based on their assigned chair and rotate as if on autopilot to enact the repetitive daily routine. As they become adjusted to the new environments, they carry their inhabited discomfort with them, causing disarray. In improvised and staged actions, often choreographed with props, the extent of their facial expressions varies; those anonymous symbolise disobedience, while those exposed become living representations of conformity. -Vanessa Murrell

(ABOUT THE LIVE PERFORMANCE)

On the opening night, a 15-minute performance will be made in collaboration with choreographer Olive Hardy and singer and songwriter Magnus Brandt. It will reference the daily routine of office workers going from work to bar to home where three performers will activate the sculptural “chairs” of At Work, At Bar, and At Home, with live music corresponding to the movements. All chairs will be positioned on 122cm squared plinths, offering the minimum amount of personal space to each performer.