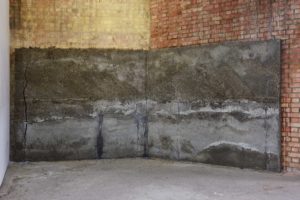 Broken or punctured surfaces resemble a form of decay. Abandoned and left to become what it is in nature, dust foreshadows the destruction of Post_ Institute. Some works are seemingly protective to the space, yet have nothing to protect given its imminent destruction. ‘Prevent This Tragedy’ allows us to plunge our own consciousness into the harsh reality of contemporary issues such as image-making in society, or the ‘death of painting’ through the history of materials – charged with primal meaning. Unsettling and constantly moving, performative sculptures mirror contemporary concerns such as migration, provoking the viewer with the temporality of these objects and humanity as a whole.

Combining ideas of materiality, ephemerality, and uncertainty, ‘Prevent This Tragedy’, curated by Martin Mayorga and Vanessa Murrell, showcases works of nine artists who each approach the theme of ‘tragedy’ through multiple lenses, from the anthropological to the architectural. Most of the works seem to be made in natural settings yet are now displayed in an industrial one. This incites questioning into process, mediums, and the manipulation of nature by mankind. Certain works negate interaction, seeming to act as a meaningful barrier, while others demand inspection and curiosity. Interweaving dialogues of permanency and variability, strength and fragility, hope and survival, the works, both distant and introspective, enable us to surface momentarily, reconnecting us to the threats of gravity and decay.

Complementing the theme of ‘tragedy’ that bristles nervously in the air, many of the artworks shown are site-specific, and therefore intrinsically bound to the doomed structure of the space. Embodying the industrial site, the works trace the evolution and ageing of its architectural and urban materiality, being just a trace of where they were created. Immense in both physical presence and emotional provocation, the works oscillate in their interpretation be- tween their physical inherent memory, and their tragic psychological aura.