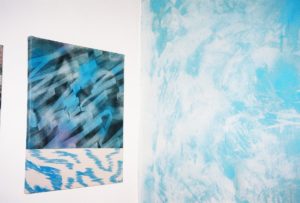 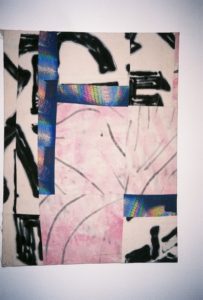 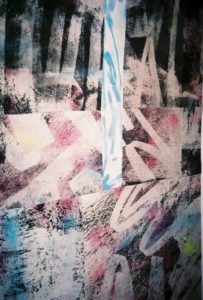 Manipulating surfaces and images to re-contextualise them.

Ralph Hunter-Menzies experiments with the idea of tension. Perhaps the most interesting aspect in his work is the fact that without the process of painting; he would question why he was making work in the first place. The artist interrogates his own process with the intention of “breaking our regular habits of perception”. Also influenced by music, movement, and the urban landscape, his practice reduces mark making to its basic elements—composition and appropriation, or creation and destruction. We spoke with Ralph about being everywhere and nowhere at the same time, and the essence of his painterly approach to working with photographs, prints, and sewn canvas.

Your working process involves photography, printing, and sewing different surfaces together. Can you describe this process in more detail?

Essentially, my works look to the art of composition and appropriation. Inspired by seemingly arbitrary yet serendipitous forms from city streets, they infer the role of place and playing with placement. Bringing together surfaces and images – such as photographs, prints, sewn canvas and blasted paint – I question and re-contextualise the images I work with. Drawing from the peculiar mixture of utilitarian, accidental and haphazard mark-making that underpins our urban landscapes, the subtle vernacular of worn graffiti, cover-ups and the DIY fix is the aesthetic fabric of my work.

In our recent studio visit, you mentioned that you have currently been in a state of working in temporary spaces, and you described how “movement has become permanent” lately. Would you parallel this quote with your practice – trying to sustain the movement, spontaneity, and energy of your marks within a fixed structure?

Movement has become something of an addiction within my works. The energy and allure of the new is something that I continue to thrive on. Indeed, the works need movement. Re-contextualisation is itself an inherently dynamic process. As the works reference a multitude of surfaces and spaces, it makes sense their own process is recorded through a nomadic state. This paradoxical element to the works – everywhere and nowhere at the same time – links them to the current circulation of images online. Abounding in meaning and connection, light in essence or source.

When looking at your works from a distance, they almost appear as a sequence of digitally blurred codes, yet on a closer look, they are intricately made with pen inscriptions, spray paint or acrylic. Is this contrast of handmade and digital an effect you deliberately try to achieve?

The works hold a certain level of contradiction. This is due to two distinct and different artistic processes. The idea of a ‘corrupted surface’ or image, like a glitch on VHS, or a graffiti tag half-worn and blurred by the jet of a power washer, has become increasingly important within my works. I am interested in looking at the tension between surface and image – how these interact with one another and influence the reading of a work. Nowadays, due to the Internet, iPhones, Instagram and a smorgasbord of other insipid and/or liberating technologies, no image exists autonomously; arguably, images never have. It’s about interrogating the process: shifting the links and connections, breaking your regular habits of perception.

The recurrence of certain motifs or marks unites your works as an on-going series. Which motifs and logos are you interested in using and why?

The semi-amorphic shapes are abstracted forms that I photographed a few years ago on a wall in Berlin. The colours and shapes at the time reminded me of the Screwfix logo, so I started to get interested in the idea that someone would purposefully advertise without receiving anything in return. A friendly neighbourhood brand-ambassador, the likes of which artists, promoters and musicians have been embodying for years with the tag, sticker and poster. This interest led me to the placement of text and shapes into the canvas, and finally a invigorated formalism.

Construction and deconstruction, deliberate and accidental, positive and negative, destruction and creation. There is a recognisable confrontation of contraries when looking at your works. Are you interested in achieving a balance between these oppositions?

Harmony and conflict interest every artist, and I’m no different. However, where others attempt to orchestrate their works to embody one or the other, I make no such promise. The works are not didactic in this sense, or too prescriptive. Harmony and conflict are produced more often than not by the inherent properties of the surfaces themselves. And in that sense I’m more of a vessel than an conductor. A lot of the ‘work’ of the art goes on inside the viewer – tracing connections and meanings, material and symbolic.

Can you expand on your interest in the urban landscape and it’s surroundings, including graffiti, street interventions, structural deterioration, and cityscapes?

In a world where everything is so immediate – of zips, clicks, taps and bings – I have become increasingly motivated by surface and process that has a history involved in it. The works are almost geared toward an urban patina; accidental marks, scuffs and intentions which come together in the work, provoking the task of finding in this an aesthetic logic or balance.

There is a very painterly characteristic in your practice, which focuses on revealing your “strokes”. Why are you interested in exposing the process of painting?

Painting is a medium like any other. Sure, there’s been painting ‘in the expanded field’ for quite a while now, but the use of paint still bears a history and materiality which affects the way we feel when approaching artworks. The hyper-slick Photoshop aesthetics of some contemporary painting – in fact, usually just printed – is one route to pursue the role of surface and image, but not mine. For me, without the process of painting I would question why I was painting in the first place. I have always been fascinated by the way things are constructed. This goes for my interest in music too; any song or painting that takes you on a journey, forcing you to work to piece together its skeleton, its mode of being and creation, is, for me, a timeless work.

Having been part of punk and metal music bands, music influences, affects, and feeds your works. Sometimes it comes through in the titles, and other times it alters the colours or composition. Can you explain the effect of music in your practice?

The titles of my works are sometimes influenced by song names, but I am also interested in approaching titles like I do surface, in a Burroughs-esque fashion, dismantling and cutting up sentences. Music was always accessible growing up and my family introduced to me an eclectic range of genres. My relationship with music is very different now. I don’t play as much anymore, but I am constantly listening to music, attempting to get through three new albums a day. That level of turn-around and immersion in different genres has made me realise that placement of sound is very similar to that of imagery. For example, if you go from listening to Papa Don’t Preach by Madonna to The Shooting Star by Gojira, you realise that what connects them is far more than what makes them different, even though one is a death metal band and the other is called Gojira. In terms of the aesthetic influence music has had on my work, the energy and idea of destruction, as creation within metal has been an enduring influence.

You are being part, and also curating a variety of shows in the UK. Do you have any upcoming projects and exhibitions?

Absolutely, I’m working on a big group show in Manchester this summer, as well as a couple of shows in East London and a collaborative work with Amba Sayal-Bennett.