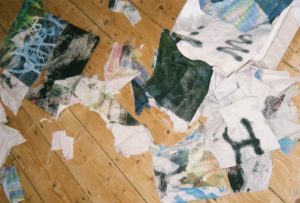 Splitting his studio between everywhere and nowhere.

We trekked along to London-based Ralph Hunter-Menzies current studio; a domestic space located in Peckham, London; finding out that he has been in a state of working in temporary spaces, and described how “movement has become permanent” lately. His work-in-progress has developed in tangent with a transitory state. In fact, the artist admits that “movement has become something of an addiction within my works. As the works reference a multitude of surfaces and spaces, it makes sense their own process is recorded through a nomadic state. This paradoxical element to the works links them to the current circulation of images online. Abounding in meaning and connection, light in essence or source.” We follow the path of Hunter’s process, accepting that any space is important to him, no matter how transitory.