In the winter of 2018, our team began a six month consultancy with William Benington Gallery, a specialist contemporary sculpture gallery based in Tower Bridge Road, London, where we were appointed to handle the promotion of artist Amy Stephens’ solo exhibition ‘Land | Reland’, which presented geological objects, cityscape materials and imagery from the native landscape. Showcasing site-specific work, the exhibition ran in parallel across two countries: at Upfor Gallery in Portland, Oregon and at William Benington Gallery, London, England.

At a peak time in the cultural calendar with Frieze Art Fair in action, we worked with the gallery to drive footfall, media attention, and to increase sales, creating broader promotional opportunities. Working across the two exhibitions and creating a joint strategy, ‘Land | Reland’ generated successful media coverage, with artist interviews published on 60-inch center, After Nyne, John Bingham, and Ravelin Magazine, in-depth articles via DATEAGLE ART, critical reviews across This is Tomorrow and Wall Street International, and influencer posts throughout various social media accounts. Bringing together collectors, journalists and influencers, we also organised a press brunch at the gallery, creating new relationships with media and collector groups.

National and international contacts were targeted to engage with the correlative exhibitions, generating maximum coverage, with messaging incorporating Stephens’ main concern with the reclamation of natural objects, architecture, and minimalist aesthetics, and highlighting the organisation’s mission of presenting works by artists who are at a turning point or developmental stage of their practice. 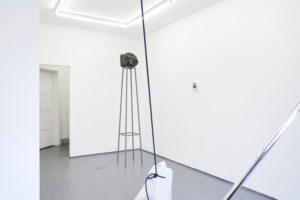 “While a thread of binary elements runs through the simultaneous shows, Land | Reland extends far beyond an idea of duality, and rather fractures connections and similarities into multitudinous perceptions like an image rippling in the waters of a stream.” Wall Street International, Alice Bauer