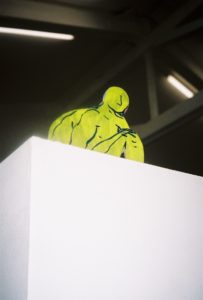 Giving form to the formless.

“I got stuck in it pretty early on”, says artist Morgan Wills “and have just continued to wallow around in it ever since”. Painting is an inherently human process, and something tied up with the human condition under the views of artist Morgan Wills. In his longing to paint the human form without it being bound by gender, age or fashion, but more as a symbol for a person in general, Morgan taps into a practice that embraces humanity, and through the medium of painting, gives form to the formless. Sometimes the works tell a story of fluidity, other times they’re a manifestation of pure colour. But the pieces are consistently a production of images of people, and invariably embrace art history—an attribute that allows his work to have a conversational feel, without forcing an opinion to the viewers. We caught up with the artist at his studio during his final weeks of residency at Unit 1 Gallery | Workshop, to learn more about the works produced during the 3 months residency, which are currently on view at his solo show “Wisdom Tooth”.

You studied a BA in Painting at Wimbledon College of Art in 2014. What drew you to specialise in this medium?

I think painting was something I started to get into around school age. I remember, in particular, when I came across the work of the London school people, especially Francis Bacon and Frank Auerbach, I really started to try some things out for myself painting-wise. I think some painters use painting as a means to do something else, and some just can’t help but get stuck in it. I got stuck in it pretty early on, and have just continued to wallow around in it ever since.

Drawing in museums from sculptures and paintings is an important part of your painting process. Could you expand on this process? How do you apply this “drawing from observation” technique in your works?

Yes, for me drawing from observation is an important skill to maintain, aside from being something I enjoy doing, it’s really useful for a lot of things. Drawing from life trains the eye, drawing from other works helps to unpack certain ideas – be it my own, or ones discovered during the analysis bought about by drawing. Study of another work of art cannot help but feed into the work, whether it be via structural or compositional ideas picked up, or figuring out a way to describe certain things that may become useful at a later date.

You have currently finished a 3 months residency program at Unit 1 Gallery | Workshop. How has your work developed in this environment?

Space and time are invaluable for experimentation, and the residency has really been a great chunk of both. It’s given me the opportunity to try out working with new techniques that I have been skirting around for a while, and sculpture is something I’ve tried properly here for the first time as well.

Recurring objects emerge in your works, such as strings, boulders, arrows, eggs, or knotted rope. Can you develop on the placement and meaning of these recurring motifs?

As well as the nods to art history, they started life as metaphors for various modes of artistic production – the drawn line, having an idea, or attempting to get said idea on to a surface of some kind, for example. They also help compositionally; working with a recurring motif can help to tackle that big question, ‘what to paint’ early on in a work and get things going, or in some cases gives you a shorthand to express certain things quickly.

Empty and full glasses of water, alongside water drips, teardrops and other water elements are constant in your practice. What is the symbolism behind these references?

Similarly to how I work with the motifs mentioned in the previous question, water has a variety of connotations to me in my practice. Specifically, the glass half full or glass half empty cliché has a duality to it that I find intriguing, and relates, in my mind, to things like the figure of Janus from roman mythology. More generally, I think perhaps the prevailing idea is this idea of fluidity. I like ambiguity, room for interpretation, as nothing is more boring to me than a work of art that knows what it is and where it’s going to end up. That’s not to say intention should be completely done away with, and it isn’t in my work, but somewhere in-between is desirable, a give and take not all one or the other – it’s a fine line.

The term “wisdom tooth” commonly references maturing into adulthood and becoming “wiser”. Why did you choose this title for your current solo show at Unit 1 Gallery | Workshop?

I like the absurdity of it as a concept, and I feel it relates to the practice of art making in a way. The idea that by the time certain teeth appear in your mouth you will be a wiser person is an attempt to gauge the un-gaugeable, in the same way that painting attempts to give form to the formless.

Why is it important for you to make works open to interpretation, rather than being final statements?

I think it’s quite easy to end up in a pretty dictatorial situation when making things – ‘here are my things, they are about this’. I personally feel most strongly connected to work that gives space for the viewer, invites you in, gives you a warm hello, how do you do, gives you the broad strokes, and then leaves it up to you. The kind of work I want to make should have a back and forth, conversational feel – no response is worse than, ‘its very nice’ is it?

You are concerned with persistently exploring the human figure: from close ups, to abstracted figures that look like objects, through more realistic representations. What is it about the human figure that strikes you?

I think that painting, or the production of images of people is an inherently human process, and something tied up with the human condition. How we see ourselves, how we navigate the world through our body, and how to go about representing this, is as old a question as there is. Why it is still interesting I cannot answer, and I think this has something to do with why it’s always going to be.

What about the grids, windows, or bars? You use them when layering your works, modifying the depth of your works. Could you explain this further?

Painting often ends up getting you lost, and I think these devices came about as ways to keep me on track. Dividing the space to make it a little more manageable. They also work as a roundabout reference to trompe-l’oeil or the illusionary, magic qualities of painting. I think they also physically relate to the object, a constrained area to view things on – sometimes it’s helpful to be reminded that this is a painting after all.

Why are you drawn to giving hints of figures or objects but not representing them fully in their natural state?

I’m interested in looking, but not so much in how things look photographically. We have two lenses to see through not one, and never see everything all at once, the eye focuses and moves constantly, sometimes staring as well, but it is a more natural shifting means of representation I am interested in, than a photographic one.

From monochrome to highly colourful works, could you develop on your strikingly differed use of colour?

Colour is mysterious, it changes constantly, some red here looks different to this red there because of what it is next to. Trying to get everything moving together, or not, (depending on the desired effect) is caught up in colour, and sometimes no colour is just as interesting. Also how could you not want to use a brand new tube of cadmium red or yellow, or erase all that brightness with instantly bold and overpowering black? It’s very much a part of the pull of painting for me.

Along with colour differences, your techniques are also very diverse in each painting. Some bold and graphic, others very loose. You use several techniques and methods, having incorporated the airbrush as a tool amongst others. Can you explain further your techniques and use of tools when making your works?

Learning how to do new things, new techniques, means you end up thinking in them. Thinking how to describe things using different techniques can often help to arrive at more interesting descriptions than you would otherwise – open different paths. My use of different techniques also stems from a love of paint, wanting to know more about it, and seeing what it can do.

Sculpture is a new addition within your current solo show. You have developed a series of sculptures during your residency, creating intimate small-scale figures that play with 2 and 3 dimensions. What drew you to start experimenting with sculptures?

I was interested in a more tactile, physical way of communicating. They are still made up of flat-ish planes, so they still feel quite connected to the paintings, but they are definitely something I want to work with further. I like the scale of these pieces, but I think it would be interesting to find a way of replicating their qualities on a larger scale.

Your figures are as well very ambiguous, sometimes you only reveal a shadow, or a glimpse of a face. Having said this, their gender, status or facial figures are never revealed directly. Could you develop on this caricatured human form? Is there a solitary or desolated aspect to them? What about their humorous or sexual quality?

Sometimes the figures in my work are very much descriptive of a particular type of person. I am certainly in a fair few. But mostly, I want to use the human figure in my work, not as a figure necessarily bound by gender, age or fashion, but more as a symbol for a person in general. As far as solitary, desolate, humorous or sexual qualities are concerned I’d rather leave that to the viewer, if you find them funny or desirable or sad then that’s fine by me.

To make a painting is to be immediately – and inescapably – in conversation with art history. This was quite troubling to me for a while, but I have since embraced it. Acceptance of this has resulted in a kind of conversational quotation of things I like. I think of it in the same way as how people quote from their favourite films or comedians in conversation, or like to sing along to songs. I’m not trying to start a covers band, but I do sing in the shower sometimes.

I have the end of residency show on until the 11th December at Unit 1, then I have a few things in Paper Cuts with Kris Day at Tripp Gallery on the 14th of December. After that, a few irons in the fire for early on next year.