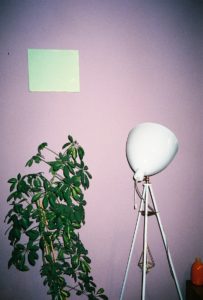 Lisa Denyer on thinking about paintings as objects.

Since 2016, Lisa Denyer has been living and working in Berlin – delivering on her mission of continuing to scratch the surface. Today, the artist makes sense of her detachment to Manchester, where she was living previously, through painting. Her paintings are small in scale yet dense and heavy. In fact, she has a mission to not only explore the physical attributes of texture and weight in her works, but also to think about paintings as objects. The artist wants us to find the resonance between her works and an aspect of digital technology, such as the hand-held element, due to her choice of scale, but also through her use of motifs, such as floating rectangles and ‘pixilated’ surfaces, that seem to deriver from the screens around us. From integrating painting with sculpture, combining small and weighty, or mingling roughness with a geometrical order, we spoke with Denyer recently about density, daily life, and her recent free standing pieces.

When and why did you move to Berlin? How has your work evolved since then, and what struck you about Berlin when you relocated?

I moved to Berlin in November 2016. I was selected for a residency at Galerie Martin Mertens in Mitte, which was a great opportunity to begin to get to know Berlin’s art scene. By the time the residency ended, I felt that I had only just begun to scratch the surface, and for that reason I decided to stay on. Quite a few of the shows I saw when I first moved here reflected themes around digital technology, including hybrid forms of painting. Those initial experiences have definitely stayed with me and informed the current direction of my work. Certain motifs have crept in, for example floating rectangles and ‘pixilated’ surfaces that seem to come from the screens around us.

Berlin’s overwhelming art scene, architectural majesty, and energetic vibe is what makes of this city a creative meeting point for art insiders. What is the role of the city within your practice?

I try to see exhibitions every week, which I think has really pushed the development of the work. I’ve been lucky enough to see exhibitions by some of my favourite artists since I’ve been here, including Tomma Abts and Karla Black. Aside from the art scene, Berlin is incredibly visually rich. I’m sure that things I see on a daily basis infiltrate the work to a certain extent. This is the first time I’ve lived outside the UK, so I was very sensitive, especially at first, to the visual differences between Manchester, where I was living previously, and Berlin. For me, painting is a way of processing and making sense of things, which has become more important now than ever.

What is your routine like in the studio, usually? Does the fact that your studio space is located in your house control your daily practice? How do you find the balance between work and life?

It can be difficult working in the studio at home, but I find it really helpful to have a set routine. I go to the library or to a café in the mornings and co-work with friends who are also freelance. The afternoons are taken up with my studio practice or gallery/studio visits. I try and have a set end to the working day at 7pm, although that doesn’t always happen if I’m working towards a show. I always listen to the radio when I’m painting. I listen to BBC 6 Music, which makes me feel connected to the UK. That really helps when I’m missing Manchester.

Can you identify creative turning points or significant encounters in your career based in Berlin, so far?

I’ve continued working with Galerie Martin Mertens since my residency ended, which has helped introduce my work to a new audience. In terms of how the work has developed, I think that one of the main reasons is because of the amount of work I’ve been able to make since I’ve been here. Last Summer I had a two person show with Valeria Maculan at a gallery in Madrid, Kir Royal. I also exhibited with the gallery at Estampa Contemporary in Spain. I had to make new work for both of those shows, and I think the combination of making so much work and seeing some really good shows here in Berlin really spurred things on.

Berlin is home to one of the world’s most varied arts spot’s with long-standing institutions and art galleries. What is your position on the diverse art scene over the city? Are you somehow involved in it?

There are hundreds of galleries, and a huge amount of artists living in the city too. I was completely overwhelmed at first, and it took a while before I felt like I was finding my place here. The art scene in Berlin is so international, I’ve met artists from all over the world here, and the same can be said of the work that’s exhibited. Recently, I was in a group show at Dada Post which was a great experience, they were really nice to work with. The next show I have coming up is collaboration between the gallery I’m represented by in Manchester, PAPER, and Palis Advisory based in Berlin. The exhibition will be part of 48 Hours Neukölln, which is a well-established art festival here in Berlin. I’m making new work for it at the moment, and I’m really excited about it!

In my recent visit to your studio, I discovered the small scale of your works, almost resonating with a phone-sized object. In terms of the scale, is this a logistical or an aesthetic decision?

I’m interested in exploring the physical attributes of texture and weight in my paintings, and for me, working on a small scale is the best way to emphasise these qualities. Even though the paintings are small, they are weighty, as the supports are very thick. The idea of density is something I’m really interested in, and the challenge of packing as much as I can into a small space. I definitely feel that there’s some resonance between the paintings and the hand held aspect of digital technology. The pieces I’m working on at the moment are free standing, and have clay bases which are detachable. They actually remind me of a devise on a charging dock or something similar.

Your colour compositions are distinctly vibrant. Are you interested in exploring the limits of saturating with paint? Where does your colour inspiration derive from?

Part of me likes the idea of making something completely minimal, stripping things right down to basic components. But at the same time, I’m negotiating with a desire to completely saturate the support with as much paint as I can, and as much colour. I see the aspects of colour and the gestural marks together as part of the spontaneous, chaotic element of the work. I want to see how far I can push things, but it’s a constant ebb and flow of pushing and then pulling back to some kind of semblance of order. I’m definitely drawn to a certain palette, and I don’t feel that I’m consciously deciding on the colours. I think they might come from early memories.

Is it important for you to reveal the process and layering beneath your works?

Yes, I like elements of the making process to be evident in the finished painting. I never neaten the edges of the paintings, so most of the time you can tell which colours are under the surface. I want to emphasise the physicality of the work, so it can’t be too pristine. Also, I enjoy the contrast between the rough, painterly edges, against the order of the geometric elements.

Clay, grip tape or sandpaper are essential mediums in your practice, instantly associated with qualities of DIY stores. What can you tell us about your choice of materials? Are you also interested in using found objects?

I’m really drawn to everyday materials. I think it’s a combination of their textural qualities, and the familiarity and connection to daily life. Sandpaper is wonderful to paint on, the interaction of the paint on such a raw surface is really satisfying. I’m interested in how the paint responds to different surfaces, and for me, it’s about the immediate sensation. I recently began to mix filler into the paint and this completely changed the way I apply it – I use a plastic side scraper so it’s pretty similar to icing a cake! I used a lot of found plywood, reconfigured cupboard doors and other reclaimed materials when I lived in Manchester. They aren’t as easy to get hold of in Berlin because everything gets recycled into hipster bar furniture!

Your practice has evolved from making semi-abstract landscapes, to going through a minimal phase, until reaching your current state of works. What lies ahead?

At the moment, I’m thinking a lot about paintings as objects. I’ve started incorporating clay into the work, and I’m experimenting with free standing pieces. Sometimes there’s a desire to make the work more sculptural, and to really consider the properties of certain materials. Then after a while, I become more concerned with compositional elements and the picture plane again. It’s a constant back and forth. I’d like to continue to expand my practice and get right out of my comfort zone. Alongside the ‘object paintings’, I’ve started working on a larger scale painting to see how I can deal with both lines of enquiry at the same time. I’m also starting to think about applying for an MA. I think the time might be right to really reflect on and question the work I’m making.