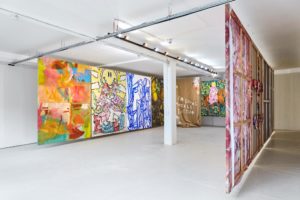 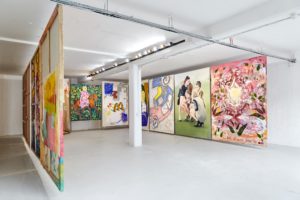 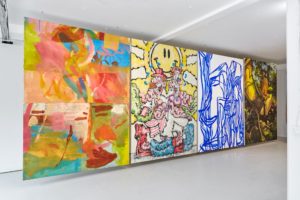 Historically, a group show of paintings typically ranges variously-sized canvasses around the walls; is likely to feature a predominance of white men, quite probably middle class; and may well equate a gestural practice with heterosexual machismo. And restricting the cast to English artists has tended to enhance the uniformity.

Those terms are reversed here. The team of eleven artists serially depart from that model by gender, class, colour, country of origin, sexual orientation and even stage of transition: Saudi-born Shadi Al-Atallah has lived in the UK for six years but is not yet ‘fully English’. The works shown, on the other hand, are orthodox enough in their format but unorthodox in their uniformity: all are some 250 x 180cm in a portrait format which, sized to the body’s reach, tends to suggest self-revelation. They are shown uniformly, too – but again unusually: all are suspended clear of the walls, turning the gallery into an architecture of paintings which the viewer is invited to wander around and between. That brings the back of the works into meaningful play, whether or not the artists choose to use it as more than a plain surface. Evidently this is not a show to approach with assumptions. 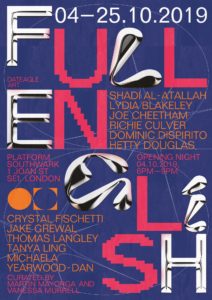 ‘The Full English’ itself is a jocular reference to a cooked breakfast, albeit that might – at least in these last remaining pre-Brexit days – include Danish rashers of bacon and Irish beef in the sausages. All the works were made for the show, and so respond to what the artists understand the national culture to be. Consistent with the very full range of English on show, their approaches vary considerably. But if there is a guiding principle here, it seems to be that the personal and the public are intimately connected. That fits the EU debate well, for where the theories of economics and governance can seem somewhat abstract, the passion roused by ‘leave’ or ‘remain’ is down to the direct connection to what people expect from their own lives. If the show has a presiding spirit it might be Martin Parr, for his way of revelling in the eccentricities of our class system even as he reveals its archaism and exposes the effects of inequality. The chav and the posh are treated the same, much as in the paintings of Lydia Blakely and Dominic Dispirito. But the tolerance implicit in that view is threatened by small-mindedness: leaving Europe needn’t be incipiently racist, protectionist, anti-liberal and backward-looking, but it has certainly seemed hospitable to those attitudes. Jake Grewal, Shadi Al-Atallah, Crystal Fischetti, and also the French tribute behind Tanya Ling’s abstraction, can be read as sharing that concern. Is it, then, a dark outlook? You can certainly take Thomas Langley, Richie Culver, Joe Cheetham and Hetty Douglas in that way, but there’s an upbeat defiance, too, in the sheer vivacity of their expression. Perhaps Michaela Yearwood-Dan, though speaking personally of her experience as a Briton of Caribbean descent, has coined the show’s slogan: knowing that there’s nothing great about Britain doesn’t stop us – the full English – from loving it. -Paul Carey-Kent

Against an increasingly distorted and disturbing political rhetoric of Britishness – itself born out of Victorian and world war propaganda – Full English is a project that aims to re-envisage a more broad and true definition of what Englishness is. The British artists in this exhibition demonstrate identity as something that is a far more varied, with a more true representation of race, gender, age and class. The ‘Full English’ Performance Marathon takes these concerns to an exhibition space.

During the one-day marathon on October 19, curated by Martin Mayorga and Vanessa Murrell of DATEAGLE ART, 10 artists will be showing individual performances at 30-minute intervals. Performance as a medium has established itself as one of the most direct ways to touch on the political, emotional and physical nature of identity. The variety of work being performed demonstrates the breadth of position in contemporary English art and society. The results are pieces that explore the gamut of concerns in performance as a genre – the body, humour, costume, emotion, language, gesture, sound, nature, consumerism, pop and fame.

A number of the artists create work on the boundaries of film, sculpture and performance. Beth Kettel’s vibrant and colourful work reflects an interest in the shifting meaning of language. Richie Moment’s humorous film piece unpicks ideas of fame, identity and the often-dubious constructs of the art world. A number of artists in the marathon have a more prop or object-based practise. Tom Sewell’s practise emerges from sculptural installations, which unpick the human relationship to nature and culture, and how they can co-exist. Louise Ashcroft re-contextualises and spontaneously reacts to found materials in environments she creates and performs within – in this case inspired by breakfast cereals.

Other artists are exploring language in a more direct way. Kerry O’Connor pieces incorporating sound and storytelling, examines the psychological power of language and metaphor and its effect on our physiology. Alongside an interest in language, Jade Montserrat’s work is also a critique on consumption and the construction of history. From his Persona Non Data Series, Takeru Brady will explore agency and choice by performing After Burden: Happy Slap, Lick (sic) or DepoSit, 2019.

Identity is one of the clearest ways artists in the marathon are commenting on the concept of Englishness. Irvin Pascal makes work about his personal history and Afrobbean heritage, as much as comments on fashion, art and consumption. Stasis’s theatrical dance performances explore the experience of femininity. Rosa-Johan Uddoh’s narrative work in contrast looks at the largely negative effects of British pop culture and celebrity on the self.

The living ephemeral nature of performance is a vital and interesting reflection to the shifts and speed of modern British existence. The exhibition of painted works the performances are alongside also have a performative aspect. Hanging from the ceiling, and visible from both sides, the works question how art objects inhabit space, move and exist alongside the human body. They transform viewers into performers navigating space. -Francesca Gavin