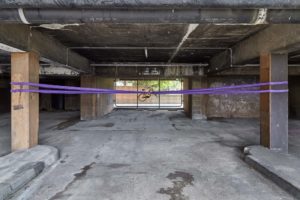 Aesthetic strength and fragility surround us. Bodies and buildings, flawed human conditions, rough landscapes and conflicted communities, the concrete playground of the Aylesbury Estate. Architect Hans Peter Trenton’s distorted vision of a utopian Walworth is crumbling. Imposing and greyscale, the bureaucracy of living permeates the air. Nowadays, the estate breeds extreme social disadvantage and dirty politics; from hosting Tony Blair’s first speech in 1997, to earning the title of ‘sink estate,’ a British development characterised by high levels of economic and social deprivation, of which the faded architecture will be replaced by modern dwellings by 2032, displacing thousands of deprived families.

Curated by Martin Mayorga and Vanessa Murrell, the fifth edition of Recreational Grounds, a project which welcomes mediation into a quasi-wasteland, unites twelve artists for action within the confines of the collapsed council structure. Enveloped by the Aylesbury Estate, the exhibition sits in a redundant carpark, closed to vehicles and currently pending demolition; its functionality has been looted. Like rocky cliffs eroded by the ocean’s lashing, this ambiguous zone is now a shell of brutalist dreams past.

A recreation ground is a piece of publicly owned land used for sports and play; a place inviting the proletariat to farm and exchange. But these Recreational Grounds are not one of transaction. The artists are reclaiming the territory that will be snatched from its residents. It is a self-proclaimed common land; a bohemian aspiration. Here, there is safety in numbers: the exhibition incorporates the largest amount of artists yet in Recreational Grounds, with the crypt-like carpark infiltrated by a series of public performances. Interwoven are concepts of unattainable longing, issues around desire and power, society’s relationship with information, ideas of communality and the ‘commons’, personal interconnectedness with the built environment, manipulative and coercive effects of advertisements, insubstantial bodily forms, depleting food sources, the elemental nature of mundane commodities, domination of human movement in everyday life, seemingly abject territories, crumbling materiality and corroded appendages; all within an environment which questions dualities of architecture and domesticity. The cold, cemented climate inspires narratives of socio-political control within the unclear future of government-built housing, whilst paralleling the uncertain prospect of a post-Brexit U.K.

Artists Verity Birt, Peter Evans, Rosie Gibbens, Ralph Hunter-Menzies, Marco Miehling, Amanda Möstrom, Henrik Potter, Helena De Pulford, Nana Sawada, Tom Sewell, Michael Wall, Poppy Whatmore and Jim Woodall have coalesced to create temporary artworks. This untethered inter-space falters between the open air and the enclosed, the public and the private, the local and the universal. The artists respond to these non-definable dualities, as well as global-scale ideas of displacement, decay and degradation. Directly above this grey plain are council estate residences, daily lives continue as usual until their turn with the avenging bulldozer.

Temporality is crucial here. The local council’s dismantling of the neighbourhood is looming. The limits of curation correspond to the structural constraints: the exhibition is shown for 48-hours only, the artwork must have no negative impact and be safe enough to be left in the public realm, it is without funding and must be installed in eight hours, the new bodies of work are susceptible to vandalism or theft. These criteria force the artworks themselves to be fleeting, from Möstrom’s devoured pigeon sustenance, to Pulford’s ignited wax sculptures. But as these works fall into disintegration, they create something new. Like a hit-and-run, Martin Mayorga and Vanessa Murrell utilise transience in a limited environment. Influenced by the barren cement-landscape, the artists exploit the ground, walls and ceiling through an interactive, communal interruption. This vast expanse has been transformed into a playground for intervention.

Darlings of the Underground