Mixing romance, rebellion, melancholy, and booze, the artist came through with an undeniably catchy mix to dance in your panties to. 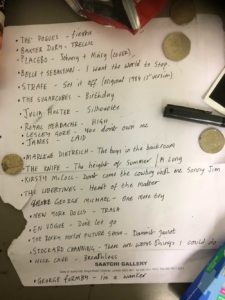 Dale Lewis playlist starts off with “Fiesta”, where we travel back time to a Spanish village festival, strongly reminiscent of Dale’s “Mayonnaise” work, depicting a genuine bullfight setting. Belle and Sebastian’s “I want the world to stop” express a judgement of the passing of time and its consequences on societal structures where “Towns’ and cities’ populations up and grow, the workers move to the suburbs”. Likewise, Dale’s artistic concerns are very much rooted in middle and low-class concerns, representing pregnant teens, violent gangs rebelling, food and drinking manners, family habits, bizarre situations from the everyday, sexual assaults, hallucinatory moments, vandalism, celebratory gatherings, amongst other subjects. Cheap and funny, Strafe’s “Set It Off” , James’s “Laid” or George Formby’s “I’m a Wanker” are brutally honest and sexually explicit tunes, mostly used to clean the dance-floor in Brighton or Ibiza’s clubs.