Inspired by a visit to the studio of Anna Skladmann and her photographic series “The Man with the Midas Touch: A Botanical Index of Narcissi” 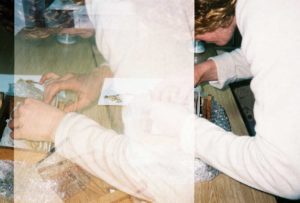 A young man is walking in the woods. A woman follows.

Her name is Echo. She can’t speak for herself. She can only copy the words she hears spoken by others. In silence, she is silent.

The young man is beautiful. She has followed behind him, placing her feet in his footsteps, ever since he strayed into the shadows of her wooded home. She both longs for him to hear her, to turn, and hopes desperately that he will not, that he will keep walking.

For a long time, he does not turn. He is absorbed, wholly and entirely, in himself, self-sufficient. Then she stumbles, scattering pine needles across the forest floor. He turns, but she has fled into the trees, smoke-like.

He frowns, turns back to his path and his thoughts. She steals silently back to the trace of his light, dusty footprints.

Twice more, sounds of the forest disturb him. Twice more he calls, who’s there? Twice more, she calls back. Then, in a rush, she reveals herself. Like a deer that, scenting danger, has held itself in stillness until the last possible moment, and it is only when it dashes for safety that you see it.

Echo flings herself into the path of the young man whose tracks she has been stalking. She glances once into his face and tries to embrace him. He throws her off, throws out words meant to injure. She repeats them back to herself until he is out of sight.

She creeps up to the mountains and hides in the caves, fading into twilight until only her voice is left.

The goddess of revenge sees the slight. Angry and powerful, she uproots the trees, bids the springy moss grow elsewhere, forms a new path beneath the feet of the proud young man.

He has already forgotten his echo.

He comes to a pool, so deep and clear and dark that it is like a hole dug into the sky. He is thirsty, and the water is cool. He pushes aside the rushes, leans over and sees him. A young man, beautiful, looking up, just under the surface. Encased in clear liquid, this man sees the water as the water must see itself – from beneath.

From the bank, the patina of the water is confusing. As he leans forward, the object of his admiration copies him, an echo. He reaches, is reached for. Then his fingertips are at the surface, and for the tiniest of moments it seems to give, before it breaks, wet over his hands. The watery youth has vanished.

Slowly, he realises that this is not a lover to be touched or spoken with. He must be content to watch. He watches. He is as still and beautiful as sculpted marble. He watches until his body fades into the twilight, his face folds into age. At last, he lays down his head on the grassy bank.

Later, when Echo came walking through the woods to that place, she found no body. Instead, there grew a tiny flower, exquisite in yellow and white, turning its gaze towards its reflection.

To create the photographic series “The Man with the Midas Touch”, Anna Skladmann worked with 30 gold medal-winning narcissus specimens from the Chelsea Flower Show. The flowers are bred and grown with the utmost care, kept cold artificially so that they bloom in time for the show in May and returned to the refrigerator every night to maintain their perfect appearance.

When the show was over, Skladmann cut a sample of each specimen, and laid them in turn onto a glass scanner. She mingled the petals with liquid and started the long technological process needed to capture a high-resolution image. The blooms act as negatives in a photogram, recalling early photography, and the botanical cyanotypes of Anna Atkins.

The resulting images are printed on a vastly amplified scale, with a coated surface that gleams with reflected light. In this context, the viewer becomes like Narcissus’ doomed reflection, seeing the face of our beloved selves from under the water. It takes a moment to get used to the strange, bottom-up perspective of the scanner – it’s oddly disorienting to see things from underneath, from the perspective of our reflections.

The flowers all have a unique character in their yellow and white faces. Many of the specimens are named after historical figures: Sir Winston Churchill (strangely shy and retiring), Professor Einstein (its bright orange crown puckered sensually), Mona Lisa (understated and simple, but with a “vigorous and prolific bulb”). Each viewer can find something to identify with, even though the flowers also appear distorted and alien. Like looking at a strange reflection of yourself, but realising that you are the reflection, and what you see on the other side of the mirror has an equal claim to reality.

Artificial and natural. Real and unreal. Life and death. These concepts are mingled and confused in Skladmann’s images. The snap of the camera shutter is absent, complicating the idea of photography as a frozen moment in time. Instead, the slow track of the scanner’s artificial beam takes in every touch of these narcissi over the course of about an hour, echoing the artificially slowed growth of the flowers before they were plucked. The enforced dormancy that allowed them to be shown off at their best, in the full bloom of their youth, for a few precious days.

They are like Narcissus in his statue-like form, gazing until he slowly comes to the realisation that he can never commune with the subject of his love, his own reflection.

When he understands the futility of his position, his beauty starts to fade. We see this in Skladmann’s narcissi. They are on the turn: a broken stamen here, a veined or slightly transparent petal there. They are entering their twilight moment, to be replaced, like Narcissus, with another version of themselves at the end of their lives, which have been both drawn out and curtailed by human attention.