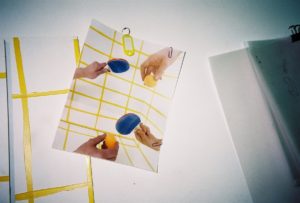 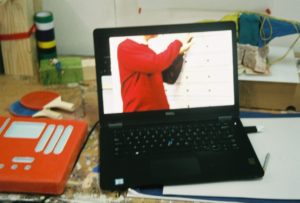 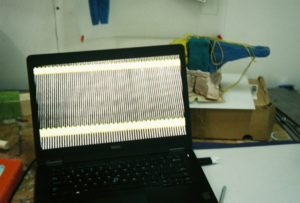 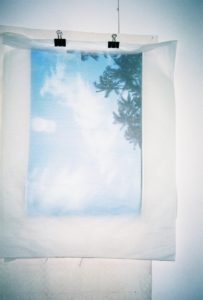 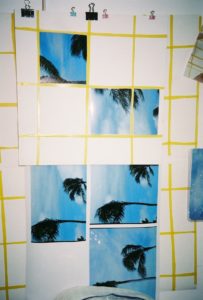 Meet the artist who’s dissecting the language of instructions.

Amanda Kyritsopoulou interrogates her art practice though an instructive lens, in which she pulls the links between instruction, repetition-through-failure, and learning. With commands, she believes that “we learn and therefore embody the language of prescription.” Her practice takes form with the use of a diversity of mediums, coming from a self-imposed mantra that she should test the idea of “whatever works for the work”. Her most recent video works are built with a strong educational feel, almost with an overly explanatory approach, “like a ‘learning the a-b-c ‘ teaser”. To understand why she builds on cliché strategies of how leisure, sports, learning, fun, and wellness are represented in popular contexts, I sat down with Amanda in between unfinished works at her Royal Academy Schools studio.

Would you agree in saying that your studies in Environmental Engineering at the Technical University of Crete, Greece have influenced the way you technically plan and configure your complex structures?

I understand how a lot of people who get to see my process and designs make that connection. However, object oriented design was not really part of my curriculum in Engineering school. Having said that, engineering studies in general do revolve around the question of how things work, or more precisely why things work the way they do; this is a question which informs big part of my work and moulds my approach to sculpture more specifically, from extremely different perspectives nonetheless.

How has your knowledge in art history and music, specializing in piano, influenced the way you think about your works?

The influence of my music background in my art-making process is still abstract to me. Music offered me a first point of contact with the notions of form, content and non-verbal language on the whole, or even this sense of producing worlds of feeling and representations, from a young age. Then being able to use such a large intimidating object like the piano, felt very empowering when I was a little girl. In the very present moment, my music skills have served as a great way to make a living and survive the demanding, almost unsustainable, London living standards . I’ve only recently started experimenting with audio, as part of some videos I’ve been working on and would be curious to work with made-up music parts , I use the word ‘made-up’ just because ‘composing’ sounds much heavier and formal than what I have in mind. Visual culture studies, more than ‘art history’ on the other hand, has been a major catalyst in the ways I think about my work. To begin with, I learnt so much, accessing theories, ways of seeing, ways of practicing, that I never knew before. At the same time, it has made things more complex in the studio, introducing this element of critical distance to my making process, which is always a tricky task. Taking the time to ‘check-in’ with this thing that I might be making, attempting that almost doomed, but still necessary effort to frame where it stands on a broader scale, in terms of the discourses and all those various trajectories and histories of ideas that it might be ‘tickling’ and playing with, is a territory which conditions a significant part of my decision-making process.

Can you identify creative turning points in your career so far?

One turning point was my last year in Goldsmiths, where after spending enormous amounts of time in the workshops, I reached that point of confidence that I can actually physically and technically make big part of what I tend to design on paper. Second turning point is maybe happening now, where having gained that self-reassurance I am asking myself ‘what now?’ .

What do you enjoy most about your current Postgraduate Degree at the Royal Academy Schools?

I am enjoying the diversity of career stages of the students. There are people like me who have just graduated from an art course, while also artists who have had quite some time of independent professional practices. I am also enjoying that I don’t feel so much like a student, but more like a resident.

You’ve spent many years as part of educational systems both in Greece and in London, and many of your works present educational approaches to notions of instruction. What fascinates you about that subject matter in particular?

It is the idea that instruction is a language in itself. It’s everywhere, from the smallest object to large environments and architectures. Then there is this weird link between instruction, repetition-through-failure and ‘learning’ , where the context of educational institutions stands as a good example; we learn and therefore embody that language of prescription. If I choose to see everything through that instructive lense, then I cannot help but wonder where are the loopholes? That’s the more fascinating question I guess.

How do you find and select the materials for your sculptures? Can you develop on your material decisions in relation to one your works in progress, based on a steel Anvil?

I work a lot with wood and plasticine, as they enable me to work with this idea of a ‘model’ like structure, somehow they capture a little of the object in its making. Other times, I might find something on the street or in a second hand store and keep it in the studio, although it usually takes a long time for something found to come into context. The anvil sculpture is a ‘roughly-estimated’ replica from the digital image of an anvil. For this work, I am interested to use materials like timber, foam and clay which are quite elemental for making anything while at the same time, if left uncoated, their surface reveals their inside. One of the things that attracted me in the materiality of an actual steel anvil is how it’s made from a singular, dark, solidified substance, which also conditions its functionality. My fabricated anvil is a much more porous and interdependent-of-its-separate-parts version.

What draws you initially to work with such diversity of mediums, having experimented with sculpture, installation, textiles, photography, and most recently video works?

Well this comes from a little self-imposed mantra that I should test ‘whatever works for the work’. Not everything can be translated into one thing all the time. I’ve actually spent a lot of time in the past, just working with sculpture and nothing else, but have come to feel that a lot of things get lost in the process of working with an idea and persisting on a singular mode of making bears this danger of narrowing things down rather than opening them up. From a more ego-centric perspective, it’s also very fun to work with different processes.

Can you tell me more about the way you expose stock images in your recent video “I’ve Never Had A Pet”? Is that apparent abstraction through close-ups a way to transmit simplicity?

Depending on what is meant by simplicity. I would say that this image-abstraction is a way to create nuances of simplistic-ness. It’s more the overly simplistic than the simple that I am interested in. Stock imagery is so raw in its prescriptiveness, fakeness and representation that I wanted to kind of water it down and work with abstraction as just another cliché along the a way..there’s a bit of sarcasm in all this.

In reference to the mentioned series of video works, they have a strong educational documentary feel – given the tone of the voice, along with the direct links between the images and words. Was this a conscious decision?

Yes, I wanted it to be a bit overly explanatory, like a ‘learning the a-b-c ‘ teaser. At first I worked with different kinds of found moving image and felt that things got too metaphorical, where there was no need for a metaphor whatsoever. It was interesting for me to see how this spoken word and image overlap can actually produce the same kind of claustrophobia, as that narrated in the voiceover. It’s not really a ‘pleasant’ work is it.

Is the viewer’s interaction a fundamental part of your works – such as in “tablet template” or in “Pawn”?

It is important to read the interaction the minute you see the object. It’s a point of access to the work that’s not based on strictly aesthetic contemplation. It makes the encounter a bit more playful and bodily. However, this interactivity is not to be enacted. I haven’t ever really made interactive objects , but in the scenario that I did, because never say never, I would aim for more complex exchanges than just moving parts or fixing parts or pulling strings and turning knobs etc. ‘Pawn’ is again more of a ‘performance gear’ rather than an interactive object in relation to its viewer.

Are you interested in building on cliché strategies such as marketing, advertisement, promotion, or presentation, while slightly disturbing them?

Yes I am, although drawing more specifically from the strategies of how leisure, sports, learning, and fun and wellness are represented in popular contexts.

Where do the titles for your works come from? Is there a meaning behind every title?

Titles make my life difficult. There’s no strategy there. I play it by ear with every work, perhaps I shouldn’t. I often note little sentences down at the back of my notebook. For example, the other day I was on the plane and noticed how the little dividing screen between business and standard class has different patterns on every side. I was on standard class, so it was just dotty. On the business class side it was an over-the-top exotic flower pattern. So I wrote ‘plain dots for the rest of us’ at the back of my notebook. Haven’t used it anywhere yet.

You are currently working in a new series of photographs that marked your holiday stay in the Bahamas. Can you tell us more about this work-in-progress?

I went there two years ago to work as a nanny for a family and just because I didn’t have any time off to explore on my own, I started taking those pictures of palmtrees, because it was literally the only thing that I could actually take a picture of, that could mean something about that place. They were not meant for artworks, but looking at them in retrospect, I felt that the repetitive variation of the shots also communicated something about the somewhat constrained situation that I found myself in. They’re shot in film and I’ve printed them out in glossy photographic paper to accentuate the cliché of the exotic landscape, so they look a bit like blown up postcards. I am not sure where they stand in terms of the rest of my work in progress, but we’ll see. I imagine them potentially functioning as wallpapers, interfering or being wrapped around the architecture of the space they’re in. That’s all I know about these photographs for now. 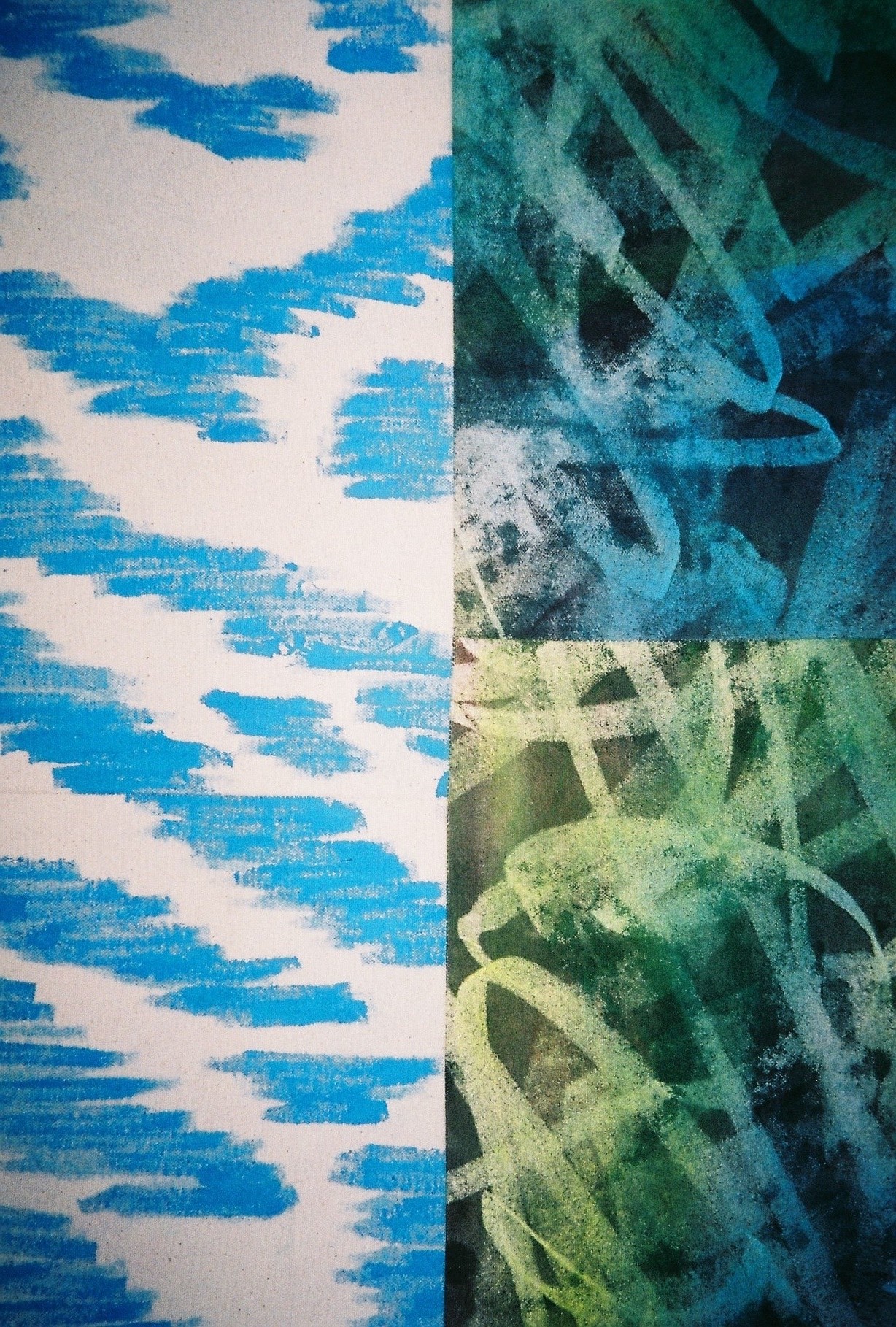