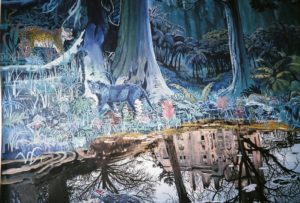 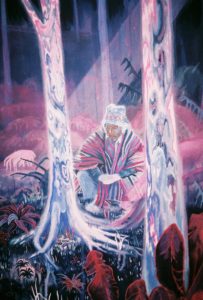 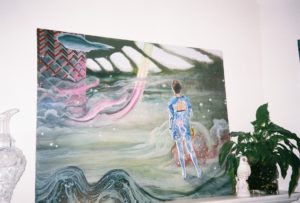 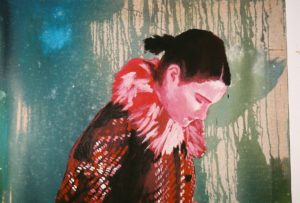 Seducing the viewer through mystery.

“I tend to think of my paintings as a series of small stories”, claims artist Rene Gonzalez. To get a better overview of his “small stories” requires peeling away his background and upbringing, so we did, and discovered that his long trajectory of painting traces back to his former art practices, including graffiti and mural making. At present, the artist is concentrating on his painting practice, which strikes as a solidified, crisp and cohesive one. Behind the vibrant colours that tint each of his creations, there are evocative stories that cater to the curious. Narratives start to emerge in charming visual manners through the artist’s use of archetypal characters, stylistic color choices, and specific references. It is clear that his practice is narrative-driven, and very much linked to that of an aestheticist, in which he states that his intention is to “seduce the viewer through mystery”, almost as a movie director engages with the viewer. It is clearly an act of duality that unifies his practice, in which the gestural and the meticulous are in dialogue, or the realistic and the fictitious feed each other, and in this context, we observe how the artist looks in depth into many dynamics, and makes us question the two versions of it.

You grew up between Canada and Costa Rica, in a time when brutal political issues were taking place. Can you tell us which aspects of your origins have moulded your thinking and art practice?

Well, my parents were persecuted after escaping the war in El Salvador, and they eventually ended up in Canada where I was born. I eventually moved to Costa Rica with my mother when I was 10, and I’ve now been living in London for six years. Whether being identified as an individual because of being from a migrant family or for being privileged for speaking English and French in a country where good education is expensive… I think the range of atmospheres has been a formative experience, showing me how malleable a sense of identity can be. I believe I had mentioned to you how as a kid in Canada I would collect comic books, and then in Costa Rica, back then, having no access to the comic books, or the TV programs I knew, I started drawing my own stories and characters, and that would eventually turn into graffiti and mural painting as a teenager. These influences are all very narrative driven practices and it’s not surprising to me that I tend to think of my paintings as a series of small stories. My work perhaps reflects this interaction between different, or at times even “opposing” aesthetic elements just thrown together seemingly by coincidence, but it’s like a sculptor’s fingerprints on the clay of her sculpture and having always been something of an outsider, I really enjoy the idea of being in conversation with the different visual languages that influenced my practice, viewing the dialogue “from the other side of things”.

“I used to think all authority was corrupt”, you stated during my studio visit. Nevertheless, you overcame this state of mind. Was this a revelation part of your decision to start producing art?

I think I was trying to explain how a sense of disempowerment can sometimes make you feel like “what’s the use in trying if things are ultimately out of your control?”, but there was certainly a point where I decided to abandon that attitude in order to take on a more ambitious approach to how I wanted to direct my career. Of course, there is corruption in all parts of society and control may be just an illusion, but hard work and determination are also a huge factor of the equation. Since this decision my life and art have changed and grown so much.

The settings of your artworks are mixed up with dominant figures like politicians, journalists, scientists, or even close friends of yours. Can you tell us what are you trying to narrate through these elements?

I often reference things like art history, cinema, pop culture, and other literature with my compositions. Being in dialogue with an audience, my intention is to seduce the viewer and suggest themes with characters that function as archetypes in conversation, about values, philosophy, politics and personal aspects of my life. As the different elements interact, stories and narratives seem to emerge.

How does contemporary visual language shape your colour combination choices?

When I conceptualise my practice as a conversation with the viewer, it’s helpful to view style as a tool for dialoguing as well as a means of expression. So style is then about the audience, not the artist. This can be seen from different angles, but I personally enjoy seeing aesthetic as an element inside a context and in its relationship with that environment, so I do take into account various visual influences, historical and contemporary.

You are currently working in London thanks to your mentor Filippo Tattoni-Marcozzi’s advice. How is this city affecting your identity, and is this perceived through your works?

Filippo really made me understand the value of perseverance and believing in yourself. He opened up many opportunities for me, and it’s completely changed the direction of my life. London is a place I always wanted to come to, and there’s something about how being here is not circumstantial but a deliberate decision that makes it very special to me. It’s only natural that my paintings reflect many aspects about British society and European iconography in general.

Your paintings are characterised by meticulous details combined with a rough brushstroke. What can you tell us about this technique? Does your style change depending on the story?

Yes, definitely. It depends on what the work is about a lot of the time. Obviously much of it is done on instinct, but the idea is to create contrast between the gestural and the meticulously controlled, using different mediums available to further convey a sense of dialogue between the techniques.

Would you agree in saying that your scenes are very thoroughly composed, such as that of a movie director?

I take much inspiration from film and artists like Jonathan Wateridge, Raqib Shaw, and Gregory Crewdson. My ideas are based on “emotions” I want to convey, so the style derives from, and will vary depending on, the mood I want to depict. The spaces in my compositions are then treated like a platform for the different narrative elements that reinforce that original idea to interact in.

I am aware that you’ve been involved in several commissions. What is your position on this? Are commissions something you embrace?

Yes, much of my favourite works have been commissioned, and to me it’s not very far from my usual practice, except perhaps for a more immediate relationship with the viewer, so at a certain level the dialogue is very direct, but the usual level of conversation with a general audience for the most part, remains, as other individuals that see the piece will have to approach it the same way they would any of my other works, and all the usual dynamics of my production and approach are mostly the same as in my other works. In my common practice, I consider a virtual audience and I approach the conversation acknowledging this perceived viewer, trying to reach them through empathy and inclusiveness, so it’s only one more step closer by having a conversation with a client. That doesn’t mean they tell me what to do though. Maybe sometimes I want to challenge the viewer, and that has certainly been the case with some commissions.

Researching, technological devices, and Photoshop editing are three aspects included in your process. Which kind of rituals do you follow, and has your process changed throughout time?

I’ve always tried to use different techniques and mediums in my work, which started with using markers and spray paint on canvas as a way to bring my graffiti experience into my painting practice, but through time that has evolved. I do use photography, collage, printing and Photoshop to create my compositions, and this stage of the process mostly serves as “a sketch”, allowing me to include many more different visual elements such as patterning, text and general elements such as spaces and textures. To be honest, I often wonder how other artists create the visuals in their work, I’m left completely clueless, but I have a few tricks of my own.  I really enjoy working long hours in a row, usually having some music or podcast in the background, it depends on what I’m painting, and definitely lots of coffee.

I’m looking forward to having a little spotlight, probably in next month’s Auc.Art magazine, as I’ve been collaborating with the platform a bit of late, and apart from a couple of small features including an event in Paris, I’m currently in conversation with the Messums Gallery, working out a possible collaboration for the near future, although no dates have been confirmed as of yet.

How do you see yourself in 5 years’ time?

I hope for the future I can familiarise the public with my work a bit more and just get more exposure. I’ve been focusing on the work for some time now, trying to take it to a place I feel is more solidified, crisp and cohesive, but I’m having to move into promoting it more and more as I feel it’s started to come together and reach that level where it’s ready for that next step.