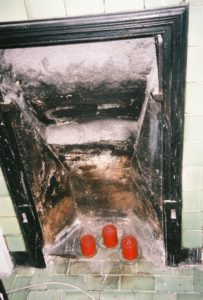 Using style as a tool.

Rene Gonzalez converts his house into a studio for the sake of not being tied to schedules. “I will often work through the night, and I need the freedom to work at any hour I want”, he states. Being in control of the space and time dedicated to his works is the key to not disrupt his “groove”. The artists defines his work/life attitude as a “can do” one, in which he is able to handle the details of his works more in depth, given his control of the space and time dedicated to it. Due to the large-scale production of some of his canvases, which can reach up to 20 meters, he usually sources an outsider studio space to work on these. It was a pleasure to be invited to his house in Balham, where the artist has been making his works for over a year now, and discover why he wasn’t attracted to the temporality of graffiti, how he uses style as a tool, and enjoy a homemade lemonade in company of his works, discovering his psychological and political views through the corridors of the space.