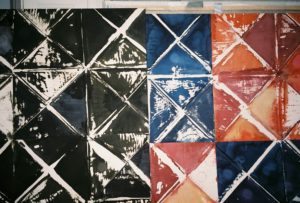 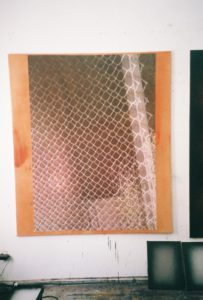 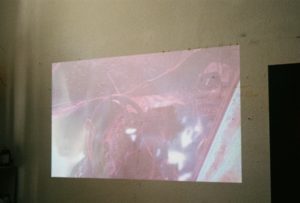 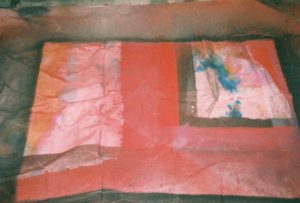 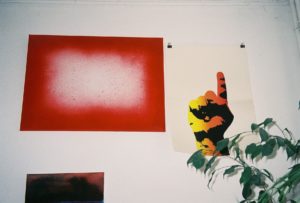 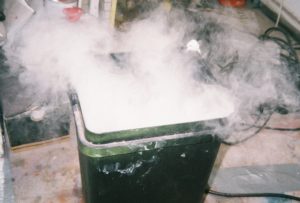 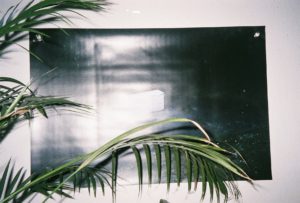 Dissolving the borders between mediums.

Artist Nick Jeffrey is not one to miss. Since moving to Berlin from London over 10 years ago, recycling has become a dominant method of working for the artist, who habitually re-uses, re-contextualised or re-interprets his ideas, describing this process as “a mental and physical journey”. His approach to working is extremely “practical, visceral, and physical”, as he puts it. When he’s not making paintings, Nick Jeffrey is putting together videos to feature on his audio works. His mediums cover everything from physical to digital, along with an entire spectrum of processes in between. His works move steadily from one medium to another one, and often several of his works run concurrently, overall impacting each other. As experimental as he is collaborative, Jeffrey cut’s across the norm: he’s currently carving out an online space due to open in 2019 for artistic development, not just to exhibit art online, but also as a curatorial experiment, in which artists will have direct and full control over the curation of their works. We caught up with Jeffrey in the midst of Gallery Weekend Berlin to discuss collaborative ideas, medium crossovers, and why he’s starting to question the longevity of living and working in Berlin.

When and why did you move to Berlin? How has your work evolved since then, and what struck you about Berlin when you relocated?

I first moved here a few months after finishing my BA at Chelsea College of Arts in late 2007- 2008. Initially, I shared a large studio with two close friends at Uferhallen, and the first difference after coming from London was the extent of space and openness both physically and mentally pulsing through the city. It was a different time back then, even though it was not that long ago, buildings were empty and it was cheaper. I would say Berlin has now changed completely, which is especially noticeable when you’re permanently living here, however people were saying the same thing back then, that the city was changing. It’s constantly shifting.

Berlin’s overwhelming art scene, architectural majesty, and energetic vibe is what makes of this city a creative meeting point for art insiders. What is the role of the city within your practice?

The city doesn’t really have a direct connection to the work at all.

What is your routine like in the studio, usually? Does the fact that your studio space is located in your house control your daily practice? How do you find the balance between work and life?

By remembering to go outside once in a while.

Can you identify creative turning points or significant encounters in your career based in Berlin, so far?

The exhibition ‘Dream Divider’ in 2016 at Horse and Pony Fine Arts (curated by Carolina Ongaro) was a kairotic moment, in terms of discovering a heightened relationship between the paintings and the films, as well as in wider fields of collaboration.

Berlin is home to one of the world’s most varied arts spot’s with long-standing institutions and art galleries. What is your position on the diverse art scene over the city? Are you somehow involved in it?

I’m starting to question the longevity of being here. The city is saturated in terms of the amount of artists working here. Galleries also seem to be gradually closing, faster than new ones opening up for example, while the city is increasingly leaning towards corporations. It’s the end zone! Other than being a practicing artist working here I would say no.

You work with a variety of mediums, including painting, photography, and videos, amongst others. How and why do you incline yourself to move from one medium to another one?

At the moment, I’m just focusing on painting, film, and audio, although with the audio I would say that it is still in the early days. Over time, I’ve found having certain mediums running concurrently really helps the practice overall. When you’re nodding off on one or having difficulty and need a break, you can pick up the pieces of another and start putting them together, which in turn impacts the other work. There’s practical reasons as well: economy, as film and audio are inexpensive to make at this point, and are relatively non material, object based, unlike painting, which is refreshing. All the mediums rub off and layer into each other and the borders between them are dissolving and becoming thinner, especially in terms of ideas for installation constructs. A friend, Alex Bacon, once described the studio as an alchemical site, and that is a perfect summary of the current studio.

I was struck by your TV paintings. How did these works spark and for how long have you been making them?

The first TV painting: ‘Untitled (Television set in a living room)’, a smaller 40 x 30 cm work, from 2016, was hanging in the studio for a long time, overseeing the other series of paintings. I tend to rotate if anything is up on the walls gradually, but that stayed. In the production of the work, the atmosphere it protruded somehow, unknowingly radiated into some of the other paintings that I only discovered after the last solo exhibition, ‘Folk’, at Hannah Barry Gallery in 2017, even though it wasn’t in the show, and since making that connection, I’ve decided to focus on them as a singular body of work, and have been working on them since.

You initiated a project space in Berlin, in which you invited artists to make works. What can you tell us about this project? Has this curatorial aspect influenced your practice?

‘ideal uh-huh’ took place in the studio periodically, when it was less full, so in its current state, that has not been possible, so the project has been on hiatus for some time now. The next stage of ‘ideal’ will be purely online, which is in the very early stages of development, and the aim of the site will be far more open, to the point where the artists have direct control over what is shown online, rather than a tighter curation. Aiming for that to be ready in 2019, and sure it will crossover in some way with the current practice.

There is a strong handcrafted sense in your practice. Is this a deliberate effect? Is it important for you the use of recycling methods within your works?

It’s an extremely practical, visceral, physical approach, and a work’s “success” rate plays a part, otherwise you just end up buying and consuming materials aimlessly, which feels weird, especially if things are slow to leave. If you’re working on a series, for instance, you tend to re-use, or reinterpret a specific idea just in various ways, which I find to be a mental and physical journey alongside the materiality of the work. So, recycling plays a really important part, also in terms of layering and to re-contextualise the work, as well as within the space.

You’ve recently released your second solo sound EP. Is it a collaborative work? How did this project come across?

The films tend to have soundtracks that are loosely close collaborations with another artist (at present with Ana Jikia) that will hopefully be a more intensive collaboration over a series of new films. Music/sound features heavily in the studio anyhow, often to the point that I’d say it goes beyond just having music or something in the background to work to. So, it felt natural to go back and have a go at production, as well as recently making videos specific to the audio. Currently I’ve started working on the next EP. 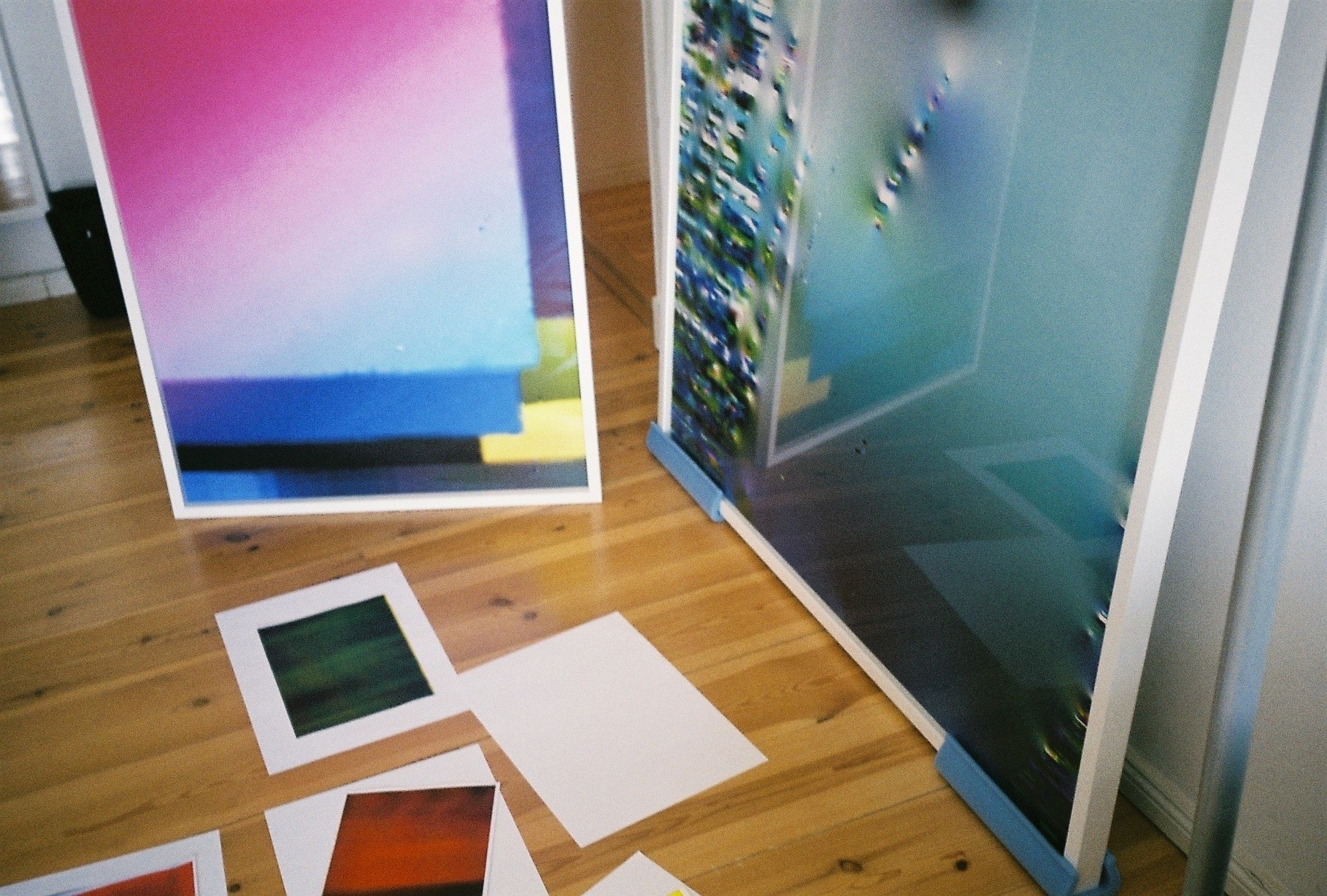