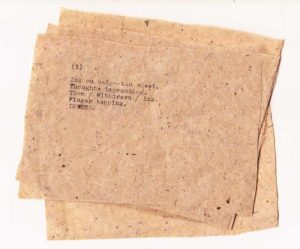 The Bodies’ Stroll is a collection of works exhibiting the escapism of the internal voice within its physical self. A storyteller, it begins to tell tales of its relationship found within its environment. Through symbolisation and metaphorical inserts, the voice screeches towards body politics, begging for its singularity within culture’s dictatorship of characterisation.

The Parts (I) is a theatrical performance space. These writings are to help resonate the idea of the separated body, existing independently. The Parts (I) clenches at the “performativity” of our physicality, exploring the individual monologue of the flesh, sight and hearing. The voice of the Other begins and is staged within the mind, transcribing its own message towards a history of physicality.

It calls for your attention, shining the spotlight upon itself and uses you, the audience, to amplify its voice through internal thoughts.

The show is about to begin.

I bite, chew, tear and swallow this cut throat squabble our tongue so naively echos. C-UT UP-S is a divide for linearity in language. Hear it’s scream or become lost in its in its translation to escape its forced existence as communicator.

For there is not one voice.

The Director’s Prose is a metaphor for the strict and controlling thought process vocalised within one’s mind. Theatre is used as a symbolisation of the performance of the voice. Through bring in familiar elements one may relate to, it situates the language within a space, releasing thoughts from its internal cage. The voice may now be performed from the outside in.

Here I present an ode to the manifesto of the artist. The Oath is small in delivery but is an important consideration towards the meaning behind the voice of the artist. I am personally seeking and exposing to you, my audience, the conscious decision I am making in fuelling my artistic practice. By signing my name I solidify a promise towards vocalising and deconstructing languages’ implications; those which are submerged deeply within our saliva and lays heavily upon our flesh.

SPIT or SWALLOW is a proposition for the audience to consider how they personally relate to language. Does one swallow the tainted formed letters, submitting to societies use of language?

Or does one leave it sitting, loosening within the salvia of the mouth, rejecting its intentions to hinder the thoughts of the individual? We must take into consideration how we digest our surrounding language, thoughts, ideals and stimulation. Language can be a manipulator. However, we have the capacity to prevent its continuation towards the root of our being. There is no perfect answer, just a contemplation of how one can relate to language in the future. SPIT or SWALLOW is a proposition for the audience to consider how they personally relate to language.

Language is a feeling which cements heavily within our existence. There are moments when words add a raw stimulation to the mind or are ridged in their historical ways. Language Equations is a prompt towards considering as to whether an individual can reconstruct their own engagement with language. This piece is unresolved, a place it shall stay. The presence of the tongue designates the birth of uttered and formed sentences. From being to being, we are the controllers of riddled lines and therefore must act out a language equation of our own.

The Silk Tips of our Master

I present to you an inhabitable space of language. Through housing the existence of our master’s tongue, I invite you to spectate the effects of words upon our physical selves. By providing a visualisation of language as an embodiment of a being allows one to demonstrate an occurring scenario, the scenario being the change of our bodies. The reformation and potential damage is done not by the hands of our own, but those dressed in a royal touch. Open your eyes to the potentiality of words and its effects upon each other and our selves.

An extract from a performative writing piece, Physically performing the written word directs the viewer to mentally voice the impact of the written word contacting the body of the page. It speaks out against language’s raw imprint through the attention of the complexity of language. This speech withdraws the page out of its objectivity, allowing it to showcase its corrupted relationship with patriarchal language, addressing its relationship with the manifestation of words.

‘Virus of Virtue’ is a metaphor of the physical self. The body is represented as a plush pillow- it is completely objectified. A running mouth with a historical, masculine tone, tells the story of a femme entrance into society. The femme is designated a tongue straight from the hand that feeds it; they can only howl to be heard as the satanic master does not wish for them to speak.