Embracing the uncanny: The dystopia of the digital as amplified via the lenticular

Olga Fedorova is a Russian artist based in Belgium, with a background she has described “in composition and colour application”. She presents us with “Generic Jungle”, her first show at Annka Kultys Gallery, consisting of eight equally-sized panels rendering different dystopian scenes using the lenticular material. This medium is very appropriate to the content for several reasons. The 3D rendering provides both an uncanny sense of depth but denies specific detail – when approaching the panels, one does not gain any more visual information. There is an open laptop in the still-life scene, and the colour pattern suggests it is open to Facebook, but we cannot be sure. In this way, Fedorova creates a screen-like effect on a non-electric, non-digital surface. This blurs the boundaries between the digital and physical realms. The digital and the ‘real’ or empirical become one and the same.

This is her first solo exhibition in the UK and all the works are from 2017, suggesting a reading with relation to discussions on “truth” and so-called “fake news” – the viewer can’t be sure of what is happening in the scene, even though the lenticular provides a realistic edge to the shapes. How do we present the truth, even if dystopian, in 2017? The panels are well lit and have depth, but this is a red herring because they do not become clearer on closer inspection. Pictures of life in today’s suburban Russia convey a similar feel to Fedorova’s panels, almost with an anthropological eye. Fedorova presents, as with the Russian oligarchy, an environment of great material wealth but a sense of disquiet, or at least an element of the bizarre. 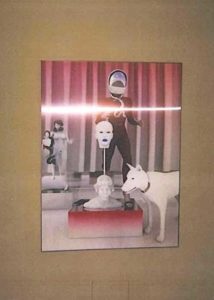 Grey life-like mannequins pose with helmets or obscured faces in computer-generated backgrounds in nightmarish greyed-out scenarios, in an arctic wasteland or a sterile room. There exists a notion of ‘boring dystopia’ in which the world we live in right now is already a dystopia but we haven’t noticed simply because it is boring, uninteresting. This is represented in the bureaucratic, which Fedorova shows in a loveless hug and a life-less scene at the pool among others. Contemporary Russia lives between a longing and nostalgia for a greater past and an expectation to rise in the future, as many expect, under the command of Vladimir Putin. That means that the present is seen as a process of waiting and the moment is drained of immediacy.

Even the ‘selfie’ moment Fedorova portrays, something so instant and in the moment, seems to be offered in slow motion. This effect is aided by the vivid use of lenticular 3D, at once presenting a sense of motion (the image shifts slightly as we move) and a deafening stillness.