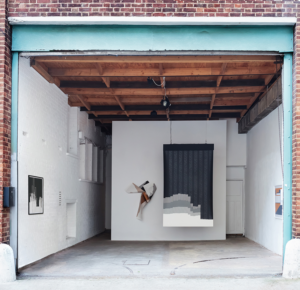 This time last year I received a message from a stranger that every artist is always hoping that will magically appear in their inbox. He’d discovered my work via social media and would to like offer me a solo show at his gallery space in Germany next year. Not only this, but the exhibition would be funded with an artist’s fee and a materials budget, plus free accommodation for my trip. The only catch, if you’d call it that, was that the exhibition had to be site-specific work only.

A year later I found myself in a former garage converted to a white wall gallery with my hosts, Directors of ‘Adhoc’ Christian Gode and Max Rentrop. The gallery is an artist-led project space set up five years ago by a couple of artists who, after graduating art school, wanted to create a balance between their day jobs as teachers and their studio practices, by offering a forum for their peers. For them the reward is in ‘the dialogues with the artist: how they think and organise their work is very interesting and we learn a lot from them. It is very enriching to meet so many different artists. To recognise the difference or similarities in working and thinking with our own practices’.

Adhoc is set on the edge of Bochum city centre, a post-industrial city in the Ruhr district, once known for its steel production. The city is twinned with Sheffield, which is an accurate parallel to this rough around the edges but culturally rich and intriguing city; with a large student population and grassroots art scene. They termed Adhoc as an ‘offspace’ which is popular German equivalent to the artist-led space, designed to exist as a non-commercial, and independent venue for the arts.

The gallery has a rolling program of seven exhibitions a year inviting an increasingly International group of artists to participate. Their aim isn’t to show work by their friends, but to create a new discourse on site-specific art and its context. The gallery’s audience is particularly interesting; I met a broad range of people at the private view including local artists and creatives, students, neighbours and the curious. Set in what is essentially a car park, the welcoming nature of Adhoc has encouraged a wide following. One local told me that he fondly remembers when a planned exhibition had fallen through so instead of cancelling the Private View, the gallery installed a smoke machine in the space for everyone to make a memorable event.

In an increasingly challenging art world, where excellent smaller galleries are struggling to survive, it’s worthwhile considering the model of Adhoc. If the key to funding a space is to have an audience and public engagement then Adhoc is testament to the notion that commercial gain is equally important to offering artists a space to create, and a platform. There are similar examples in Germany including 10qm, a square patch of grass in Cologne that facilitates outdoor arts events in Cologne, 20qm project space and Super Bien! a ‘greenhouse for contemporary art’ both in Berlin. It begs the question of whether UK arts spaces could follow this model as an alternative to residencies, to provide artists with the opportunity of a solo exhibition outside of the profit making restrictions.

Who are the UK equivalents of Adhoc? There aren’t many spaces that operate with the model of site-specific only exhibitions but there are quite a few that use former garage and industrial spaces as exhibition venues. Here are a few examples worth mentioning:

Rising from the ground next to a bulldozed patch of land is a significant one-storey structure designed by Christian Odzuck. For those unfamiliar with the area it would be easy to pass the site assuming it is in the middle stages of building project, however it is an artwork. Odzuck investigates the artistic concerns of architectural fragments and structural processes in the city. For this piece, he reconstructed elements of the site where the premises of the financial authorities once stood. Focusing on the conspicuous exterior stairway of its previous occupant, a new staircase and platform is in place, for visitors to enter and explore.

A curatorial team and experimental art project space established in March 2012 by Cristiana Bottigella, Sigrun Sverrisdottir, and Tisna Westerhof, in New Cross Gate, South London. It is an excellent example of a group of enterprising creatives working with the local authority to revitalise a building which had formerly been left vacant for many years. The rustic garage is now both a studio and meeting space for the artists. In it’s current format ‘Room 6.0’ hARTlane has a rolling 6 month programme of exhibitions based around a wider topic that provokes social engagement around current affairs.

Set up in 2017 by artists Dominic Kennedy and Howard Dyke. This artist led space is tucked away in a railway arch near Loughborough Junction station. They have developed a word of mouth following, by avoiding the gallery trappings of self promotion, and instead focused on presenting good quality contemporary art. To keep up with them follow their Instagram or join their mailing list.

Based in Dundee, Generator is an exhibition and project space that began over 20 years ago. It is an artist-led organisation with a committee and membership scheme; it was established to allow creative practitioners to develop experimental, critical and contemporary work, with the opportunity to exhibit. Generator aims to provide opportunities to artists by providing a diverse and vibrant programme of exhibitions and events.

A not-for-profit visual arts project based in Streatham Hill, London, run by artists Paul Cole and Natasha Kahn. Housed within a former factory space, with ASC studios, is an independent gallery that hosts six solo exhibitions a year. It aims to engage with the local community – Simon Callery’s exhibition 2016 is an excellent example of this. The next exhibition by Alice Wilson explores the artists relationship with landscape within framework of DOLPH’s artist centred brief, essentially asking ‘what makes the artist tick?’

Based in two connected garages in Brighton, with a third across town, ‘Lock In’ provides a platform for artists working in durational performance to open up a critical debate with their live and non-live audiences. Original set up as a performance space it is now in a permanent venue, and therefore outside of the curated programme, offers the space for hire as an exhibition, studio or workshops venue.

The Ryder Projects falls somewhere between a commercial and artist-led gallery space in former garage in Bethnal Green, East London. It was established in 2015 by Spanish curator and Goldsmith alumni Patricia Lara, who wanted to provide artists with the opportunity to present experimental artworks without the pressures of having a commercially viable exhibition. The exhibition program has a strong focus on performance, video, and installation, complemented by public talks and events to encourage dialogue and critical engagement. The Ryder represents three artists and participates in art fairs.