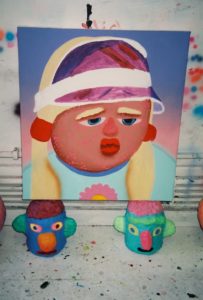 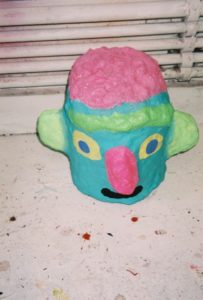 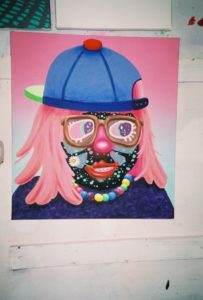 Ethereal characters that are free from restrictions.

Featuring an assortment of cowboys, bodybuilders, and wildlife, Super Future Kid’s works allude to a vibrant paradise that brings us back to youthful memories of being free from social constraints. It serves as a reminder of the beauty in the grotesque and the bizarre, in which her characters and scenes are presented in an unlimited range of saturated colours. The German-born artist has tapped not only into presenting us to supernatural creatures, but also to exploring a dreamlike sphere—far from her childhood recollections of a separated Germany—and what this evasion from reality, straight edges, sharp angles or man-made objects means today. To better understand how Super Future Kid approaches painting, we spoke with the artist about her invented persona, her recent sculptural works, and the humour behind her choice of titles.

At which point has your practice evolved from creating collaged mystical scenarios to concentrating on “zoomed-in” figurative works?

I’ve had the same technique or style for almost 6 years, and I felt that I had pretty much said everything there was to say with that technique. Artists are always looking to expand or change their practice, so I had been thinking of changing my way of making work for a while, and it took some time for me to figure out what I really wanted to do. One day in late 2017 it just clicked, and from one day to the next, I dropped everything that was connected to my old work and started fresh with what I am doing now. My whole approach to making work changed as well as the medium, it was a fairly radical shift, but still felt totally natural and organic.

What can you tell us about your choice of name being “Super Future Kid”? Is it a take on humour, a fantasy of never growing old, or a statement against classification?

I picked that name in 2011 when I thought about being an artist more “seriously”. I had never felt comfortable using my real name in connection with my work, it just didn’t seem to fit very well, and I rather wanted to choose something for myself that also connected with my work and my whole attitude to life in general.

To what degree has your artistic career grown through Saatchi Art’s platform?

For me Saatchi Art was incredible, they were very supportive when I just started out by promoting my work a lot. This allowed me to give up my day job, which was a very cool one, testing video games for SEGA, but in the end what I really wanted to do was making my own work full time, and I’ve sold so much work through Saatchi Art, that I was able to do exactly that.

Why are you inclined towards the medium of painting?

I love the substance with its different consistencies, the unlimited range of colours. Put paint on something and it will change. That’s what I love about it, you can make something look like something else and create whatever you want really.

Where does your interest in bodybuilders or cowboys derive from? Are you exploring ideas of gender stereotypes throughout history?

Cowboys and Bodybuilders are just badass. My work doesn’t revolve around them, but I do love those images. The cowboy is something that had already captivated my little brain when I was 5, the idea of personal independence, riding around on a horse, free from social constraints; it’s my idea of a perfect life. I loved playing with my cowboy and Indian toys, and I also had this awesome cowboy costume. So in a way, I’ve always found Wild West stuff super cool. And bodybuilders are just so grotesque and bizarre, the idea of morphing your body into those shapes, almost like a balloon animal, its totally revolting but in a dang fascinating way.

Sculptures are a very recent addition to your practice. Both functional and aesthetic, these “tótems” serve as a base that elevate the painting while also being an extension of the painting itself. Why and how did you decide to expand your paintings into a physical state? Is this painting continuation deliberate?

I’ve always loved doing 3D stuff, but had never really focused on sculpture until last year. The act of propping up or elevating a painting from the ground normally has a practical purpose, and I usually used old paint cans or buckets to do that. I had seen Chris Ofili’s super glamorous elephant shit balls at the Tate back in 2010, and the idea of making something to elevate your canvas rather than using bricks or pots had been stuck with me ever since. I wanted to make something though that had its own face, so I started making those heads and then car wheels, roller skates, boots, and so on. Its so much fun to make those extensions! They are in a way pieces in themselves, and together with the painting they form this awesome boyband.

Your sculptural works have a strong DIY sense to them- made out of cement, glue, and shredded newspaper. How did you come across this process?

I was researching different sculpting techniques and the fact that I don’t have a kiln or oven lead me to using materials that harden without heat. There are a lot of materials, but many have disadvantages like shrinking or not being strong enough, but I came across with some recipes that are perfect for making my sculptures using papier-mâché, glue and cement.

What can you tell us about your use of the iPad as a tool to compose your paintings? Do you use any other devices/instruments?

I love my iPad. I use it to draw and paint all my ideas with an app called “ArtStudio”, its perfect for developing ideas for paintings. Mostly, I love it though because I can paint while I’m in bed. Almost all of my ideas come before I fall asleep, and I draw and paint it all down and then when I wake up the next day, I pick up where I left off before eventually getting up.

You implement a strong play on language with your use of titles. Can you develop on your choice of titles with us?

To me, titles are a necessary enemy especially since words are not my strong suit. The task to successfully transporting an artwork into the realm of language, dialogue, and conversation can be very hard sometimes because you need to convert a feeling or the emotional essence that is hidden in a painting into words. And then again on other days a title comes real easy.

There are hardly any man-made objects depicted in your works – is this an attempt to re-connect with nature, childhood freedom, and spirituality?

Yes, for some reason I don’t like painting man-made stuff very much, particularly everything that has straight edges and sharp angles. But there is no deeper meaning behind it, it just doesn’t feel natural to me, and I have no idea why.

When we recently visited you, you described yourself as a “very sensitive person” – do you think this comes across in the distinctive expressions and emotional states of your characters?

Darn it yes! I am hypersensitive with just about everything, smells, noises, and feelings. It can make things difficult at times, but I also think that it can be advantageous because you can also be more perceptive to certain things.

From Ron English to Mr Potato Head – what other inspirations can you share with us?

All kinds of 80s and 90s toys, Play-Doh and action figures (Masters of the Universe, Toxic Crusaders, Ghost Busters, Happy Meal stuff). I do love characters a lot, and the more grotesque they look, the more I like them.

We are aware that you have a solo exhibition coming up in June at Hiromart Gallery in Tokyo. What works will you present? Do you have any more projects ahead?

Yes, I have a solo show coming up there soon! It will also be my first time going to Japan and I am already super excited. The show is called “Dolphin Disco”, for which I’ve made 10 small paintings and some small flat wall sculptures. The limited scale was a bit unusual for me, since I usually like working in a large scale, but it was a lot of fun making the work. Besides that, there is quite a lot of stuff going on across 2018. I’ll be showing new work at Christoffer Egelund’s annual group show Summertime’18 in Copenhagen in June, at Martha Contemporary in Austin, Texas also in June. Mindy Solomon Gallery is taking some of my new work to Seattle Art Fair in August. Then, I’ll be showing new work in a group show at Tales of Art in Italy in October, curated by Sasha Bogojev- and finally, I’ll be making some new pieces for Thinkspace Projects, LA for a show that they curate at the MOAH in Lancaster, California and for SCOPE, Miami. 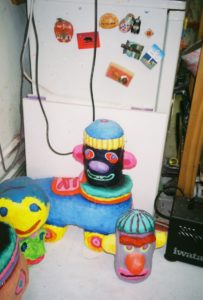