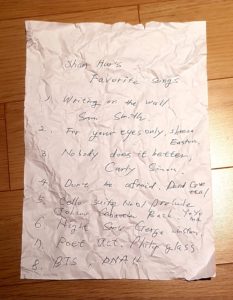 Songs for a time to be contemplative in front of the mirror, with headphones, experimenting dramatic dance moves: ‘Writing’s on the Wall’ sets the scene for the following thrilling set by artist Shan Hur. A sensitive crescent of loud impressions which reflect his own practice, mysterious and neo-archeological like artworks. A meditation on the fragility of the human being, facing the monolithic structures of the contemporary city: “Tell me is this where I give it all up?” in Smith’s song. No no, slowly but surely we hear the voice of reason: “You see what no one else can see, and now I’m breaking free” words by Sheena Easton next on queue. A balanced distribution of the sense of uncertainty and the existence of magic. Just like the objects found between bleak architectural complexes in Hur’s work, question the hybrid identity of being human today. This feeling is embodied by merging structural forms like walls and pillars with objects like the violin and the cello, instruments are also present in Bach’s Prelude and Philip Glass’s ‘The Poet Acts’. This MIX stimulates musical imagination of the layers in the creative process: starting with a “BAM!” from the first impact, a cloud of debris caused by destruction which finally reveals a treasure, an artwork or K-pop’s jewel, BTS.

A coded musical manuscript traces in eight steps the explanation of the beautifully broken. 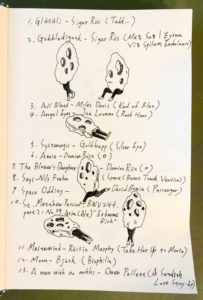