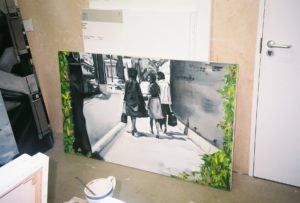 Using sadness as a strength.

Using nostalgia with a rose tinted view to encourage a conversation about culture and heritage has lately become Michaela Yearwood-Dan’s chosen form of expression. The mixed Caribbean and British artist, whom identifies to have grown up in a culture that stereotypically is left out of the ‘established arts’, uses the medium of painting as a tool to break the status quo, and show respect and acknowledgement to women and artists of colour. The London-based artist refuses to paint black men as threatening, an image mainstream media seems to enhance with manipulative cropping and image filtering, and focuses on depicting pure and fragile moments within male-to-male or female interactions, enhancing the “femininity” of all black bodies. Her cultural upbringing influences the context of the paintings that she makes, those featuring two versions of themselves: one vibrant and botanical, paying homage to her bright Caribbean heritage, whilst the other represents monochromatic elements, referencing archival photographs of black livelihood. Michaela first discovered the role of language and therapy a few months ago, when she self-healed herself from an emotional breakup through scribbling personal words and phrases onto her most recent series. During this time, she had a vision of inviting people to input into these works. This initiated a large scale collaborative piece –and in essence, found vulnerability to give her strength.

You mentioned that the first painting you “did and liked” was quite an abstract piece. How do you think your paintings have evolved throughout time? Are you subconsciously thinking about this piece within your entire practice?

I suppose there were paintings in my teens etc. that I liked before which were quite figurative, however I that was the first painting I made whilst having been in art school that I really liked as I was enjoying seeing the way my work was developing. I think that over time my artwork has become a bit more confident and refined via the imagery I use. Regardless as to whether I’m creating abstract or figurative work, I think I approach each piece with a sense of confidence that steams from the knowing that I’m still learning and growing and if something doesn’t work out that it’s all part of the process towards me making something I’m truly happy with. I think I do sometimes think of that work when I’m feeling moments of self-doubt, conscious that interchanging between figurative and abstract may make it hard for people to establish my work as my own, however I realise that the way I use paint there is a clear signifier that they share the same artist.

In my studio visit, it was striking to see a painting of the connections between the exoticism of the land and houses in Grenada, alongside London and its brutalist Council Estate buildings, clashing your mixed Caribbean and British heritage in one piece. Would you agree in saying that your heritage and family are one of the reasons that pushed you to start painting?

I wouldn’t say that they were the reasons why I started painting as a whole, but I would agree in the sense that my cultural upbringing influences the context of the paintings that I make. I think that growing up in a culture that stereotypically is left out of the established arts- although is full to the brim of less elitist forms of creativity, I think those influences of performing and creating were always instilled in my, therefore I always felt I was destined to do something creative.

“Enter the Dragon” was the name of your exhibition at Organhaus, China, in 2017, after your residence there. Did you find this experience inspiring to your work or technique?

Overall I found the experience in China quite overwhelming. It was at times very difficult being a Black Westerner there as I attracted a lot of attention so because of that I think I held back truly experiencing all I could whilst there. Directly after leaving I didn’t see that my work was affected by the experience however whilst out there I experienced lots of traditional art and the realised upon reflection that I tried then and still do now try to emulate balance within my abstract works enabling them to have plenty of compositional breathing space.

Your love for filmography and music is a source of influence for your titles and scenery compositions. Moreover, you use the iPhone as an important tool when painting. It strikes me that your film, musical, and digital decisions are part of your process, yet not considered as final mediums in your practice?

In short I’m just really rubbish at making films. Academically I studied a specialised Painting degree rather than Fine Arts one so find that this is the medium I’m most comfortable with and have not yet fully explored. In this digital age I think it’s important for me to paint even if influenced by modern technologies.

“Love Letters to Siri” is the name of your first and most recent series in which forceful, heavy, and erratic brushstrokes are combined with detailed marks, which make the viewers come closer to the painting. Is this work quite personal to you? And what is the role of language, therapy and performance within this piece?

This work is definitely the most personal art that I’ve made to date. Following the inevitable end of a romantic connection with an ex-partner I hadn’t created in a while and felt a genuine detachment from my practice. For some time prior to this personal situation I’d also felt this detachment and wanted to delve into personal experiences to inform my work but wasn’t sure how. During this time of self-healing I realised that when I was feeling any height of emotion, I would right down words and phrases and draft messages to people in my iPhone notes and with this I knew it was something I could create work from. The words written in the pieces, although some illegible, some quotes from songs, some things I genuinely wrote to myself are all reflective of what I was feeling at a time and often the moment I was creating the paint, and because of this the process gives me strength through the transparency of my vulnerabilities. I’m not sure I’d say performance plays a huge role in these works because the physicality of inputting these emotional moments are meant to be hidden and personal with the painting as the end result. However, I’d say the role of language and therapy started as a personal approach and through talking about this series I’ve discovered that it’s a therapeutic process that many people do so there is the potential for me to invite people to input into these works or develop the series into workshop/large scale collaborative piece.

Your 2016 work “Boy In The Corner” impacted me due to the act of jumping in this work being straight, stiff, and empowering, and almost suicidal at the same time. You claimed that a kid in the corner of the composition is your favourite amongst the others around. Can you tell us more about this piece in particular?

Yes, so the image is based on double page spread found in an old National Geographic magazine where a group from a charity gave some children in a village in South Africa a trampoline and this painting is based on the left-hand side of the whole image. It was influenced by the manipulative cropping and image filtering that is often used within the media to alter the way in which they would like people to be seen: i.e. the mug shot type imagery of black men to had been killed by police both here and in the states (Trayvon Martin, Mark Duggan etc). What I love about the kid in the corner is that he is literally looking away from the action in the scene and out to the audience, which gave me in the instant feeling to name the piece “Boy in The Corner” after Dizzee Rascals debut album which is arguable the first mainstream grime album to bridge underground grime to more popular contemporary music at the time.

In my studio visit, you quoted: “My work responds to nostalgia with a rose tinted view”. Can you clarify us how you use sadness as a strength?

Being in tune with your emotions is so important. Giving yourself time to feel and grow after sad moments in life is essential. When I talk about nostalgia in my work this way it is in the sense that I look back at my life, culture, heritage in a way that sometimes can seem to idealise it, and that is simply because I think we all as humans spend too much time focusing on the negatives in life. I’m just choosing to take sad moments and arguably hard upbringing and turn them into something beautiful.

Your works break the usual status quo, by focusing on a male-to-male interaction, or enhancing the femininity of the female, and the fragility of the black male. Why do you feel fascinated with these controversial gender issues? What other themes can be seen in your works?

Black men have always throughout history have been portrayed as something to fear or be cautious of and that simply is not how I’ve seen it so I refuse to depict them in this way. Men in general are negatively stigmatised for showing deep emotions and of course I think that’s crazy. I find venerable and pure moments shown within male-to-male interactions and try to depict them. As the enhancement of “femininity” in my work, I do this as a sense or taking ownership. The stigma against emotional females is seen as such a negative, but as established I see these strengths and factors that make women so equipped to deal with the world and all it throws at us. Until the art world wants to show the same respect and acknowledgment to women and artists of colour, I will continue to make stereotypically “feminine” work and paint all the black bodies possible.

Vibrant colours clash with black and white tones in some of your canvases. What leads you to combine these monochromatic and saturated elements?

I think the influence of the black and white comes from documentation photography and that of archival photographs of black livelihood and even my own family archival images that adorned my home growing up. Juxtaposing them against bright botanical imagery is partly just an aesthetic I like but also is a way to pay homage to my vibrant Caribbean heritage

Can we have a ‘glimpse’ at your upcoming works and exhibitions?

I’m currently working towards new works for a solo show at the end November, and prior to that my work will next be on show at the Sarabande Group Show 2018 opening to the public on 15th August – 4th September 2018.