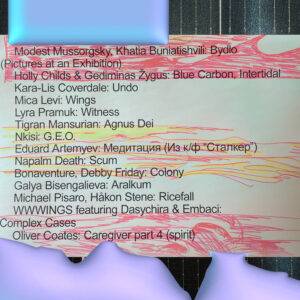 Splintering disciplinary lines, Amsterdam-based collective Metahaven share a selection of tracks cogent in their motley expressions. Extending an undefinable classification, this is a MIX that, at its nucleus, mediates on possibility. Authorial amplifications constantly expanding.

We begin in obsidian nadirs where the heavy, insistent tread of ivories in ‘Bydlo (Pictures at an Exhibition)’ sets a sombre tone. But with ‘Blue Carbon, Intertidal’, automaton verse lulls us into the sensation of seeing in the dark. The flotsam and jetsam of its glitchy recital mimics the visual fallout that has come to define the corporate and political worlds and which Metahaven respond to with censure. Ebbing through, Mica Levi offers up a claustrophobic audio interface where lo-fi synths drone a murky charm. But we rise, feasting on the fibrous hymns of Lyra Pramuk’s ‘Witness’. Excavating the instrumentality of voice, the track hints at agency, the non-verbal acts that depict contemporary forms of power. Trance loops, left-wing grindcore and gothic pop remind us still of the bold diction of Metahaven’s neofuturist graphics, where strobes like primary colours identify cosplays of democracy in design. In an attention to depth, Galya Bisengalieva’s electroacoustic lament for the evaporation of the Aral Sea sings out an entangled haunting fluidity reminiscent of the cinematic poetry expressed in the collective’s upcoming film ‘Chaos Theory’. Yet perhaps most visceral is ‘Ricefall’. An experiential composition that hears grains of rice falling to carry the graduation of rainfall.

Buoyant when freed from the restrictions and expectations of form, Metahaven’s MIX pieces together odd assemblages that consider receptivity. Close your eyes, landscape soundscapes and consume consciously.