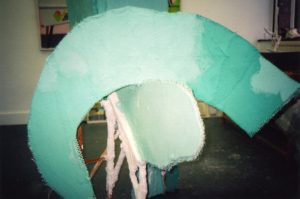 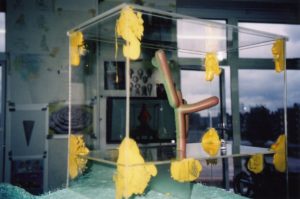 By transforming paintings into sculptures, making multiples of sausages look like cactuses, constructing Classical roman busts reminiscent of brutalist attributes, making ‘reverse paintings’ and using colour to bind his work together, Jean-Philippe Dordolo‘s practice is rich in playfulness, yet addresses social concerns such as hierarchies, whilst referencing art history and culture at large. In this interview, the artist reveals the techniques behind his practice.

You studied a BA at Central Saint Martins, initially focusing on photography. What led you to shift towards making sculptural work?

My degree was non-media specific. I studied my BA at Byam Shaw School of Art. The school was absorbed by Central St Martins in 2011 – the year I graduated. Byam Shaw was a liberal institution: a small college with small classes and a can-do approach to making. I think I followed a natural progression in my practice going from photography to sculpture. I was already interested in the texture and finish of some of the subjects I was photographing. I liked the grain and ‘body’ of post-war Japanese photography for instance. It is raw and uncompromising, sometimes even confrontational. By the end of my first year at Byam Shaw, I started to experiment with other media. By the end of the course it became clear to me that I was neither a sculptor nor a photographer. I just like to play with the language of a medium, to experiment within perimeters.

What is the role of ‘flatness’ in your sculptures?

I don’t know if it has ‘a role’ as such. I think it is the result of practical concerns and curiosity. When I started working with flat planes of material, I was trying to get away from the idea of the container / box. I understand the idea of volume in sculpture. Yet I was curious to see if I could achieve something voluminous and sculptural out of something flat. It was (possibly) less labour intensive. In some way, the approach to making was more direct.

It took me some time to get into colour. At first I thought that colour was too distracting. I was trying to come to an understanding of the physicality of a sculpture: its raw materiality and structural qualities. I think the shift happened when I started considering flatness and the treatment of a surface. I found myself looking at assembled fragments of MDF and plasterboard in the studio, and they looked fussy. I needed a binding agent, something to bring it all together. Colour enabled me to do just that. It became the facilitator of a unified body. As I gradually developed a taste for a specific palette – which is rather light and cheerful – it also provided a good entry point to connect with the work. Suddenly these piles of industrial material became something other, with pastel tones of pink, green and blues… In some way, it completed the transformation aesthetically rather than structurally.

You have been working in the casting department at Goldsmiths University for one year, what have you gained out of this?

The experience has been invaluable. I had the opportunity to learn things the right way and get a good understanding of the potential of mould-making and casting. Once you get to understand a process, you can play with it more. For example, I started to think about casting beyond the mere reproduction of objects. It became an opportunity to alter objects’ characteristics or meaning. Multiples of sausages stuck together started to look like cactuses. Classical roman busts could start displaying some brutalist attributes. Then I started to transform paintings into sculptures using the casting technique.

Could you explain us your technique and why you define your cast paintings as ‘reverse painting’?

I have always understood painting as the accumulation of material (paint) on top of a (flat) surface. Traditionally, a painter would work their way from the back (support) to the front through successive layers of paint. My cast paintings are the outcome of a sculptural process. I chose to cast the back of a stretched canvas to question and play with the idea of the point of view: being the painter or the subject of the painting. There is something about transparency: seeing through or beyond the easel as an intermediary. Also, aesthetically, the structure of the back of the canvas was more interesting to me than the front! The works are cast in a composite material from a rubber mould. The first layer I apply in the mould is the one the viewer will get to see as the foreground in the work’s composition. All other layers will successively sit in the background. I work my way from the front to the back: from the finished surface to the structure (or support) of the work.

We could consider your sculptures to be paintings and your paintings to be sculptures. Is there a dialog between your wall and floor works? Does their hanging define them as either sculpture or painting?

There is a dialogue between both wall and floor works. I have tried to apply sculptural techniques and processes in a more painterly format. And reciprocally I apply a painterly finish to sculptural works. Eventually the work adopts a sensitivity close to both media.

You incorporate many found objects – most recently sausages or hats – which you then modify. What is the significance of the objects you use in your work?

I don’t always know how things are going to evolve or exist prior to starting to work with an object. I use found objects in different ways. Sometimes, they’ll exist independently. Other times, they’ll be part of a larger configuration. In the latter case, I need the smaller objects to either determine, or recalibrate the direction of a work. I may build a larger structure with no obvious relation to anything. It could just be an assemblage of material. It helps me to address concerns around the idea of scale and space. This is a way for me to start thinking about hierarchies, as some materials tend to come across as superior to others. Yet the whole thing bothers me a little. These structures can be difficult to relate to, and at times they can come across as a too self-important. I feel like I need to bring the dialogue back to something relatable. So, I use altered cast objects to add some strange familiarity. They can be quite ridiculous! I don’t think they take themselves too seriously but they become part of a balancing act with the larger structures which host them.

Your references range from Greek mythology to surrealism to pop culture. Could you speak about them further?

I like the fact art history can inform us about a time and place. I’m interested in the status and value of things and how they are granted importance. Objects with a proven history seem to acquire more kudos than commonly readily available goods. I am wondering whether I can employ a wide range of references (to high art, classicism, popular culture, etc.) in order to reflect on hierarchies and power play within a contemporary dialogue about history.

Your practice includes performances, but rather than preforming for an audience or public, you’d rather film yourself in a private setting. What is the role of performances in your work, and why don’t you perform in public?

By 2015 I had grown tired of what I could now describe as compulsive making. I was frustrated by what seemed to me like a never-ending accumulation of crafted matter. It left little space to reflect. I think I aspired to create a distance with objects as an automatic outcome of labour. I started working with performance in summer 2015 during the Triangle Workshop residency in upstate New York. I made short videos. I was still using raw material as an accessory (clay, plaster etc.). In some short films, I interacted with the objects I had been crafting. I focused on the act of making and my relationship to materiality, rather than paying too much attention to the final product. I wanted to record these experiments which involved action and reaction. The performances were captured privately with my mobile phone camera. They were spontaneous and uncomplicated. I’m not against the idea of performing for an audience. I think my work simply hasn’t had the need for it yet. I have been the performer in these works because it is convenient (I don’t need to ask for anyone’s help), and it is an opportunity for me to learn about my relationship to making, and not making.

Are the materials and techniques you use more valuable than the work itself?

I wouldn’t say they are more important; they go hand in hand. Perhaps they are equal? I learn through making. My understanding of materials and techniques broadens my vocabulary. It gives me more tools to (hopefully) keep moving forward.