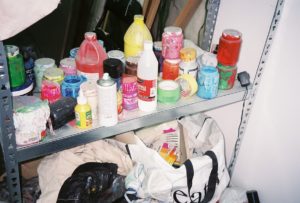 Where kings and queens become objects.

A few meters from Stratford, Acme Studios provides a working space for Dominic Dispirito. The artist has been provided with a studio award, giving him a free space for a year, a grant, and sessions with visiting artists and curators. As he recalls, “I couldn’t ask for anything more, really!”. With 3D printers, PLA filaments, and an Airbrush gun, Dominic transforms the pearly kings and queens into permanent objects, and plays with light on his everyday subjects, to appear as seen from an iPhone screen. A purple-haired re- mannequin whose face has been re-worked with a plastic surface welcomes me into the space, in which the artist clarifies his recent process of covering ordinary objects including newspapers and beer cans with PLA filaments, physically trapping them inside.