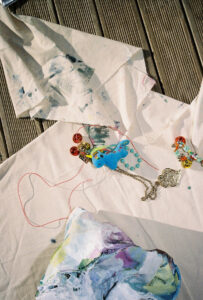 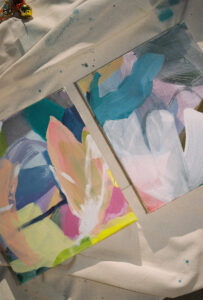 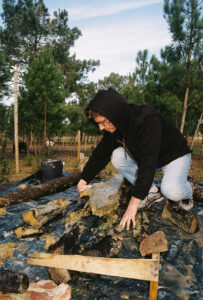 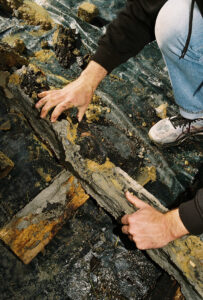 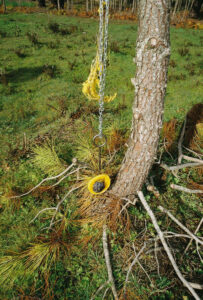 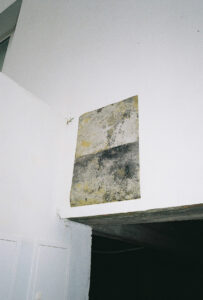 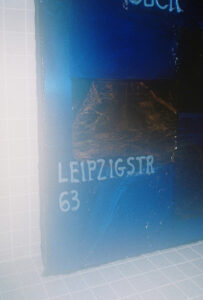 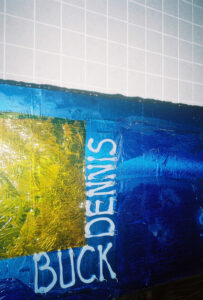 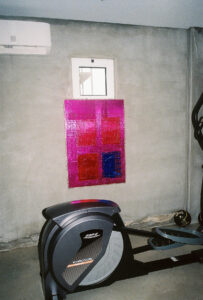 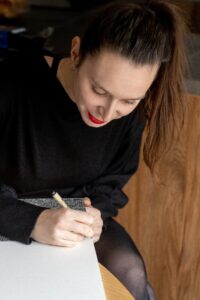 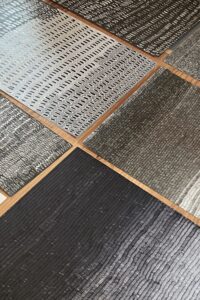 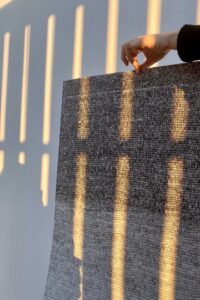 The five resident artists Alice Morey, Dennis Buck, Gonçalo Sena, Marlene Huissoud and Violetta Ehnsperg were invited to live and work on the Portuguese countryside for three weeks to start the New Year free from distraction. In these uncertain times of a global pandemic the residency’s aim was to provide space for reflection, self-care and time for developing new work in the framework of the surrounding nature and in exchange with other creatives in a small community.

Halfway between the countryside and the sea, Craveiral Farmhouse provided all artists with their own self-catered apartments, a studio space, material, as well as the possibility to work outdoors. In order to keep everyone safe during the stay, necessary precautions prior to arrival were taken, as well as an adherence to the codes of conduct in relation to corona during the residency.

It was a hot Viennese summer about ten years ago when I first worked with Carla. Back then still students, we were assisting for a photography workshop led by Japanese artist Rinko Kawauchi. As blissful and inspiring this weekend was, I can still picture it clearly. Nested on the rooftop garden of the Hundertwasser building, the workshop brought together international photographers for a weekend in this oasis, a vertical forest of a house. Hundertwasser’s credo was that humans need buildings that (1)​ allow them to breathe again in connection to nature and with each other.​ Work and life was discussed over big dinner rounds, people could withdraw in the shadow of the trees and focus on their practice or either way choose to chat, discuss and relax in the sun with each other.

Looking back to this workshop in Vienna back then, I have realised that the shared inspirational experience was not only the starting point to a friendship, but also an understanding of art and life that was at the centre of BLANK residency at Craveiral: a participatory approach formed by writer Irit Rogoff, where in a Deleuzian spirit, art is less being objectified to theory, but rather being thrown at its viewer, fostering curiosity and activating reflective thinking. An approach in which everyone creates their own narratives and is being let to engage on their own, encouraged to look and trust their (2) intuition.​

We are living the reality of going through a pandemic, since almost a year. A time, when it is as important as never before to be collectively alone, as Christoph Amend, editor in chief of German Zeit Magazin famously tweeted once the pandemic took its course. Even more so, moments spent collectively in the residency with the artists and the Craveiral environment were precious in reconnecting to nature, each other and ultimately to ourselves.

Even before the pandemic, the current social and political climate were increasingly characterised by growing polarisation that is creating divisions in both national and international communities. The ever-growing state of uncertainty and helplessness make political scientist Hannah Arendt’s “The Human Condition”, written nearly 60 years ago, all the more relevant now: the advocacy of the value of speech, dialogue and criticality that are born out of spaces of appearances, of actions as a collective, through (3)​ the responses that art can elicit.​ Such examples of exchange and curiosity are ways of reaching freedom and change.

Alice Morey​ is a Berlin and London-based interdisciplinary artist, with an MA from Chelsea College of Art, London and a BA in painting from the University of Brighton. She is interested in the passage of time and finds beauty in decay and contrasts it with pain. In previous pieces, she has juxtaposed natural and artificial materials in order to explore the concept of change. Her performative work could be considered ritualistic, as she undertakes actions charged with symbolism in a ceremonial tone.

During the residency, Alice spent special moments between forging inspiration and materials, the surroundings, reading and writing. Her aim was to deconstruct the landscape by interweaving her practice with chance happenings to which she could build a poetic dialogue, dealing with the challenges of intimacy and violence.

The first week she spent gathering plants, dying silk from the waste from the kitchen, melting wax, researching natural soaps, reading a book on intimacy and care, making fires for her homemade compressed charcoal from the pines trees, pounding the local clay and finding a way to connect to her own rituals of living. The weeks that evolved combined these elements into painting, and delicate forms that became time sensitive sculptures in the natural habitats; beeswax coated dried herbs in chains among the pines, fish bones and ash set in ice in the puddles of water, charcoal rubbed paintings in the apartment, mobile mussels in the outside pool and a spontaneous poem of a concrete body in the dirt.

Portuguese Gonçalo Sena​ lives and works in Berlin and Lisbon. He graduated at the Fine Arts University of Lisbon and received his MFA diploma at the Dutch Art Institute, Arnhem. Employing drawing as a starting point, his work develops through material and architectural processes, resulting in sculpture, temporary structures and displaced environments. The vocabulary of each project derives from an ecosystem of non-functional relations between everyday objects, industrial materials and organic elements, all apparently immutable, yet, all in constant mutation, combined in space as raw, unresolved, landscape narratives.

In-residence, he worked simultaneously on a sculpture and a series of works on paper, using materials sourced by the surrounding landscape, such as clay, burned wood or rocks from the Atlantic coast, and industrial ones, commonly used in housing construction, such as concrete and sand. His work process took place outdoors, allowing the weather conditions to take direct action over the materials: rain, wind, sunlight, determining their drying cycles and transforming the outcome result. Almost every night, we lit a fire, from which he saved wood that wasn’t fully burnt. These dark logs were then assembled together with clay from nearby soil into an organic formwork built on the ground. After pouring, drying and curing, the concrete cast kept imprints of the burned wood and fragments of clay, becoming a material memory of the process.

Marlene Huissoud​ is a French experimental designer and artist who graduated from a MA Material Futures at Central Saint Martins. In her work, she questions our way of making by creating purposeful pieces that ethically test the properties of natural resources and that defy the role of design in society and its use nowadays. Self-aware and progressive, Marlene’s work balances nature’s natural disorder with man’s disordered need to find meaning in everything.

BLANK residency at Craveiral was the first time she was taking one month off her busy studio schedule. She viewed the opportunity as a retreat to step back from her practice and meditate on how to see the future post Covid.

“I went back to my most cherished practice for reflection and meditation: drawing. I really enjoyed this time, pregnant, and realised that this moment of slowing down that I’m always mentioning in my work is key for the future. Not only for me but for everybody to become aware of a very challenging future.”

Austrian Violetta Ehnsperg​ is a visual artist with Thai roots, currently living and working in Vienna. She studied Painting and Sculpture at the Academy of Fine Arts in Vienna. Her body of work includes abstract painting, installation, fashion, sculpture and scenery. Her work reflects origin, femininity, the will to independence and ultimately: identity.

Whilst in residence, she reconnected to her painting self and enjoyed “taking her sweet time” wandering the details, as to her, painting is a highly site specific craft. She finished a series of small format pieces as well as a shrine that was meant as an offering to a ghost that came by a few times in the beginning. “Craveiral, as far as the architecture, the food, the wonderful staff and the other artists and curators”, she describes “was the perfect base for three intense weeks of work.”

German Dennis Buck​ lives and works in Berlin. He studied at the State Academy of Fine Arts in Karlsruhe and at the University of the Arts in Berlin. In addition to painting, the spectrum of his artistic work extends to sculpture and photography. He avoids clear symbolism and thus refuses anecdotal interpretations. His pictures reflect his attitude towards individualisation and mass-production.

During the residency he continued working on his “tanned paintings” series. It is a sequence of works originated in a residency in Joshua Tree National Park. The idea is to cover textiles partly, lay them out in nature and have the UV-Rays of the sun bleach away the color of the uncovered parts. Depending on the location and the time of the year, it takes between three to eight weeks to complete. After bleaching cotton and silk in the Mojave Desert, Sicily and on a Berlin Rooftop, he wanted the sun to fade synthetic textiles, mostly polyester at Craveiral. The process of bleaching in this case will take longer, due to the whitening blocker worked into the materials. After a couple of months, we will see the final results. Besides developing the tanned paintings, he worked on poster paintings that also function as advertisements for his handbag line ‘Buck Bags’, including first ideas for bag patterns, which create the base for upcoming pattern works.

BLANK Residency o​ffers artists accommodation and studio space in changing locations. With the aim of further developing their practice, the artists are provided with a platform to collectively explore contemporary issues and experiment with addressing them. The challenge of working in an unknown, perhaps unusual space opens up possibilities and at the same time and enables the artists to approach their process differently. A programme of talks, activities as well as shared dinners promotes interaction and collaboration between the residents. 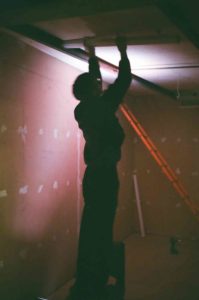 The Importance of Collectivism, Collaboration and Community