Exploring space, rationality and notions of enchantment as the UK eases out of lockdown.

I sleepwalk around my house, the proximity of you and I. Stealing a moment’s privacy, within my makeshift studio I sit, coffee in hand, in the room where the washing machine hums in sync with the freezer. I imagine the aerial view of my apartment’s floor plan; screeching chalk lines drawing up the divisions of each room. Next door is another’s house with fewer lines, more lines, odd shapes, more or less units to measure. Finding little of inspiration within the 1.2 x 2.1 metre room with an in-swinging door, I take out my phone.

Up pops a recommended link transporting me to Thomas Ruff’s Space Oddity show in the “Virtual Room” of Mai 36 Galerie, Zurich. A large unpeopled white and grey space, to be navigated through my screen. The link grabs my hand and walks me around the 5 x 7 metre space. Ruff’s ‘Cassini’ series of manipulated photographs from the Cassini-Huygens Spacecraft mission present the vastness of Saturn, neatly compacted and mounted into 108 x 108 centimetre frames. The 175 thousand mile radius of Saturn’s rings expand and retreat as I pinch and release the screen.

I wonder about my body’s dimensions in relation to that viewing space, to the other bodies viewing it remotely, and to the celestial bodies themselves. The moments that enable you to stay in one place whilst travelling to another, to be in two places at the same time – time travel? “Experts” say that time can be experienced in two ways: the linear, unit-measured invention of it and the conscious experience of internal time. Here, it is even possible to greet the face and voice of a person no longer in close proximity, to mediate between ‘inner’ and ‘outer’ worlds, pausing time to delve into the freedom of an internal space.

During a national lockdown, we are all at odds with space.

Opening Co-Star, I check my daily astrology reading against the scattering of 5 million other users of the app. Extracting data directly from NASA, “It doesn’t reduce complexity, it does not judge, it understands.” It greets me, and willingly retreats as I scroll down to examine today’s latest connections, joining those seeking reassurance through answers to the unanswerable. The numerals and co-ordinates of my date, time and place of birth map out a hyper-personalised reading for the day. Today is going to be a good one, for sure. Exercise is essential.

In the 1919 paper ‘Science as Vocation’, renowned Sociologist and Philosopher Max Weber analysed the effect of ‘rationalisation’ in Western civilisation’s progress. Weber identified the shifting focus from religious institutions towards the specialisation of the pursuits of modern science and academic research, which subjected human life to calculation, measurement and control. Dominant ideologies had shifted away from a realm of ‘enchantment’ with its mysteries of the universe, towards the knowledge-bound rationale of ‘disenchantment’ in a growing secular society.

100 years later, our days are punctuated by the National Address where world leaders are flanked by chief medical and scientific advisors. Deaths are translated into digits. Digits are translated into patterns; curves and shapes on graphs. Future projections delivered to our armchairs as easy to discern data. But despite living in an information and technology-driven world that would suggest strong underlying rationale, could we in fact be witnessing a diversion from ‘disenchantment’ towards ‘re-enchantment’ once again? Whether that is in the hands of a deliberately evasive government, or through a broad, renewed yearning for spirituality. Re-enchantment today ignores political divides and holds us all under its wanted or unwanted spell.

Trying to align my body and mind, I join the herd and run my thoughts into the soil. Each day, beating to the rhythm of safely spaced distances between us as we lap the same green square. How many have you done today? 5K run, nominate 5 more friends, donate £5. Numbers. Counting. Time. Reps.

Behind the war-footing lexicon of ‘us versus virus,’ a pattern of illogic has been deployed through the UK government’s supposedly “guided by the science” pandemic action plan. Minister Gove attempted to reassure the public that policy is being led by the best expert advice, despite previously proclaiming: “people have had enough of experts.” Meanwhile, the Chair of the UK Statistics Authority is calling the government to account on its miscommunication of track and trace data itself, where predictive stats have been disguised as recorded data to manoeuvre public opinion in their favour. And, while a disproportionate number of BAME people were fined for alleged breaches of lockdown rules, co-architect of these orders, the PM’s adviser Dominic Cummings evades them with no legal consequence. Each day, rules warp and are broken by the very people implementing them; dismantling the rationality that Weber’s ‘disenchantment’ is built upon.

Across the globe too, we see a theatre of denial and negation in politics, on whose stage it becomes possible to outright refute evidence and propose an alternative fabrication. It is no wonder we may question placing our faith in the rulings of human judgement. When you cannot look up to leaders, why not look to the stars? They surely know better.

Astrology has periodically been turned to in moments of social, political and economic crises. The first astrological newspaper section was printed in the Sunday Express amidst the 1929 stock-market crash. “What the Stars Foretell for the New Princess”, it read in a celebration of the birth of Princess Margaret; a celestial gift of good fortune? Or a convenient distraction? Decades later, after the 2008 Wall Street Crash, reportedly even bankers called up astrology hotlines.

Since the political destabilisation of 2016, astrology has marked itself at the intersection between psychoanalysis, science and alternative therapies. Propelling the colloquial use of astrological terminology once again, tuning into one’s “shifts in energy” or the compatibility of star signs are never far from conversation. It offers people a sphere to address their emotions while living in a capitalist production-driven world that demands a repression of internal forces. Now, with the speed of personalised apps, a growing number of Millennials are, as Co-Star claims, allowing “irrationality to invade our techno-rationalist ways of living.”

Astrology is just one example amongst broader cultural shifts in this era of Western re-enchantment. In the UK there has been a swell in tarot card readings, the purchasing of healing crystals, the popularity of yoga and meditation, and a leap in the number of people who identify as Pagan or Witches. Whether you subscribe to them or not, such trends represent a very real, growing societal desire to “delve deeper”.

With much activity taking place online in the form of apps, youtube tutorials, podcasts or even purchasable objects, an investigation into the ‘inner’ self is at our fingertips, and even more abundant throughout a national lockdown. Of course the space for new, expansive belief systems always runs the risk of being co-opted by rationalistic capitalist ideologies. A lucid dose in the form of an “Amazon shopping horoscope” forecast.

Each day I have paced the living room in an attempt to navigate new artistic terrains. But creative impulses wax and wane.

In some ways, the artist has always enacted the enchanter, transforming materials to summon imagery and visions. The first cave paintings are thought to have been accompanied by ritualistic gatherings and transcendental experiences, in connection with ancestral or animal spirits. Launching in 2017, the Venice Biennale’s ‘Pavilion of Shamans’ was devoted to historical and contemporary Shamanism in relation to art.

Artists have always questioned prevailing systems of thought and “knowledge” to keep them in check, but the revival of mythic symbols has been overtly present, particularly since 2016. The increase in witchcraft and ritualism has also contributed to a broader re-mystification of the art world. On a grass roots level, the history of witchcraft is a political terrain to be mined in relation to class, gender and racial oppression. From 2015 to 2017, WITCH, a Chicago-based performance collective, staged “ritual performances” to protest unfair housing practices, using modes of mysticism to critique the un-empathetic ‘wisdom’ of government policy.

Searching for inner inspiration to take me beyond the edges of this room, I close my eyes and enter a memory. The experience of being lost within the mythical worlds created by Wangechi Mutu, entangling myself in the glittering reeds that coil around grotesque limbs.

Mutu’s well-known collaged female protagonists, drawn from East African mythologies, are made up of the very stuff of capitalism, that itself was born of colonialism. The artist often uses images from anthropological, ethnographic and medical texts to create her figures – Western academic sources that are arrogantly created in the belief that their own perspectives are more rational and calculated. Yet in actuality, they are problematically enchanted; created through the lens of white domination and separation that has structured racism, nationalism and sexism. Mutu disassembles these deeply ingrained societal myths in order to rebuild and re-enchant them through her own empowered, forward-looking Afrofruturist visions. Her 2018 commission ‘A Promise to Communicate‘ at the ICA Boston aimed to draw visitors into conversations about collectivity and free speech under an idealistic and ‘less rational’ version of a world map, consisting of humanitarian blankets.

Emerging from a national lockdown, the evening still carries on its warm breeze a wave of fatigue at the day’s stories.

As Mutu’s practice exposes, stories and mistruths have always informed the dominant belief systems of the time – whether we know it or not – and can be witnessed now in the process of political re-enchantment occurring. While this plays out daily, other spheres of life simultaneously counterbalance it through processes of re-enchantment. The revival of alternative beliefs perhaps enables the process of self-reflection that is needed now to see into the ‘inner’ and beyond.

For society to break away from pre-defined modes of being and thinking takes such monumental shifts in our perception as altering the universe’s configurations. Astronomer Nicolaus Copernicus did just that in the early 1500’s, when he proved that the Sun, not the Earth, was at the centre of the then-perceived Universe. With homosapien’s ‘unique’ capacity for thought, so strong was our enchanted anthropocentric belief system, that signs had been ignored by astronomers for centuries.

Covid-19 has undeniably caused a rupture in the physical and psychological times and spaces that we occupy. Against the backdrop of supposedly ‘expert’ driven governing, the frustrations with perimeters of space and restrictions of mobility in a lockdown scenario force us to find new ways of connecting. To be guided by the ‘irrational’ can pave the way for a more holistic relationship with oneself, others and the universe. As physicist and ecologist Fritjof Capra wrote: “Spiritual awareness is an understanding of being embedded in a larger whole, a cosmic whole. Of belonging to the universe.”

We should have begun listening to Suzanne Treister a while back. Like a contemporary Soothsayer, the artist seems to have got it right in her vivid painted imaginings of possible futures based on the ideologies that have warped our pasts. Utopia or Apocalypse – it’s in your own mind’s eye. “Use the Museum of Blackhole Spacetime to travel to another universe”, her website suggests. That sounds like exactly what I need right now. I navigate my cursor towards the page and find myself staring at a blank black computer screen. The perfect puncture of expectation: the internet, a galaxy of infinite worlds, offers me the ultimate antidote to itself. I stare into the flat darkness, a hazy self reflection gazing back.

I take a deep breath and count down from 500, charming myself into calmness.

Hot Desque is a nomadic curatorial partnership between artists Lizzy Drury and Neena Percy. Their exhibitions aim to bring artworks together as part of a theatrical mise-en-scéne, encouraging cross-disciplinary collaborations and risk-taking. 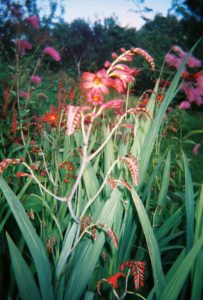