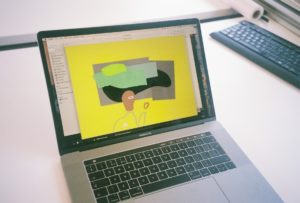 Meet the artist who, since recently taking up painting again, has found his niche.

While artist Piers Alsop’s paintings are often fictitious, each scene he produces creates an atmosphere that chimes with the present, forming a space where Alsop imagines different lives, perspectives and narratives evoked from a single moment. His artistic influences, which include Francis Bacon, Edvard Munch and Marlene Dumas, resonate in the dark qualities often found in his work. Take for instance Alsop’s figures, whose haunting and provocative faces often have indistinguishable features; presenting an unsettling ambiguity. Below Alsop explains why he is fascinated by our capacity to turn our lives into a commodity and how his paintings can be viewed as mirrors, of sorts.

Your studio is located in the Architecture firm aLL design, an international collective of young and established architects and designers, each with broad artistic interests and specialisms. Do you feel that working around other creatives helps inspire you, and your process?

Painting can be a lonely business; so being in a studio of architects is a good remedy for this. Looking at their models always sets me off thinking about sculpture which for a painter (primarily), is a fun exercise. I make a few sketches, but usually get back to painting pretty quickly. I have started making some maquette’s recently though, so I think it is influencing me.

It is only in the last year that you decided to take up painting again since graduating from Camberwell in 2007, can you explain what made you want to start practicing again?

I have always thought I would come back to it at some point. But, I think it took my father becoming ill for me to really throw myself in to it. I read a quote once that said “your parents give birth to you twice, once when you’re born and once when they die.” I’m not sure who wrote it, but I’m finding it to be quite true for me. You begin to understand the fragility of life and our limited time. I can imagine that for others it may also set them free from scrutiny and expectations, but that is not the case for me – I always felt supported; it was a matter of arriving at a point when this suddenly felt like the thing I wanted to do most of all in the world. It’s probably also a catharsis, but I try not to question that process too much at the moment.

How did studying at Camberwell inform your practice, and would you say your creative mindset and process is still the same as it was during your time there?

I don’t accredit much to the course at Camberwell. It gave me time to try things out, but that’s about all. Maybe that’s all an art course needs to give. But I feel more like a self-taught artist. This is not the fault of the course; I was quite an introverted person at that point. The philosophy elective was the most useful part of the course for me.

How have you found the experience of being included in the Royal Academy Summer Show 2018?

It felt great to be included in what was to be the last RA summer show my father would exhibit in. Bittersweet, but good. I had never thought of submitting work before, but it felt right to try this year. It has been good to get the work in front of such a large audience, and to be selected the year that Grayson Perry was curating was a bonus, as I really respect him as an artist.

Your paintings are often fictional, and frequently take the form of collages, constructed from found images or photos you have taken; with this in mind, do you consciously avoid making your works autobiographical?

I think I feel like more of a spectator than the subject. I’m a people watcher to a fault really. I enjoy eavesdropping and watching the way people move and stylise their speech patterns. I’m quite nosy – it’s always interesting at night when people turn their lights on, but don’t draw the blinds. I like to see the way people live, and what is important to them. I suppose all my work leaves clues to my own personality but it is not a conscious thing.

It appears that your paintings are individual pieces rather than part of a larger series given their diverse aesthetic – are you consciously aware of the diversity in your work with regards to your painterly technique?

The style and technique seem to change with the subject. It always comes with trying to convey a certain atmosphere, and that happens with changing the colour palette, and sometimes the painterly technique. I never quite know how a painting will end up. Even when I have a fairly rigid digital painting I want to stick to, you think it’s going to just be a matter of copying the plan, but then it all changes. It is a process that can take anywhere between two days and sometimes months. Even then, you sometimes come back to it. A part of it is also not wanting to paint myself into a corner, and the enjoyment of trying out new techniques. That is something I always admire in an artist like Picasso – his constant thirst for new ways of representing, and never standing still.

You mention that you enjoy the idea of the artist being a curator of thefts to create something new – with this in mind, do you believe in originality?

Grayson Perry always says originality is for people with short memories. I tend to agree. There are of course some artists that seem to come out of the blue with a fresh approach, but I think that if you were to understand their influences completely, it may not be such a shock, as often demonstrated in retrospectives.

One detail that resonates in your work is the faces – their facelessness – is there a specific reason behind this?

I think that is a bit of a coincidence. I’m enjoying treating faces/people as just another shape on the canvas at the moment, and experimenting with a level of abstraction. I did this with my painting ‘Night Youth Interior’ because I was thinking about the way people use inanimate objects as a point of pride and pose next to them. In this case, the boy is sitting next to a stack of speakers, and I wanted to turn the painting into a bunch of shapes to, in a way, not differentiate the boy from the sound system and to show no bias in terms of importance. My painting ‘Yawn’ was a reaction to a painting by Henry Taylor called ‘The times they ain’t a changing, fast enough!’ about the shooting of Philando Castile. I wanted to start a conversation with that painting and convey the sense of apathy I felt was present in the white American public at that time, so it felt right to not have defined features but faces that represent a section of society that the viewer can project on to. The almost faceless ‘models’ look directly down the barrel of the lens, in detached observation. So, I seem to keep coming back to it but with different motives. Maybe I just can’t draw faces.

You made a film back in 2017 which inspired you to work more with digital compositions, can you tell me about this film?

I made a film for the British milliner Flora McLean, whose brand is called House of Flora. She makes these great hats that are very structured and architectural. She was the perfect client, and gave me free reign to do what I liked. The result was a short animation based on the surreal world of Magritte in spaces I designed inspired by mid-century Latin American architecture. It was whilst doing this I thought I’d make some digital paintings to turn into little animations. But instead, I started painting them, and realised how much I missed it. The immediacy of it; the fact that you can touch it and change it on a whim; and the time it gives you to think. You don’t get much of that with animation – it’s all planning. Changes are a bit of a nightmare.

It seems as though some of your work touches upon the darkness of technology, a slightly Charlie Brooker-esque attitude, as seen in works such as ‘Spooky Sincerity, Extra Positions’ is there any truth in this?

I like Charlie Brooker’s work very much, and I can see why you would draw the comparison, but I don’t identify with the unease about the modern world which Brooker is now famous for. I’m interested in modes of communication. Whether that’s through the constant evolution of our language or a pose struck; a piece of clothing, a cigar, or an emoji. All of these things broadcast information – often personal – sometimes unconsciously, others times highly consciously. As part of that theme, I’m interested too in displays of emotion, or lifestyles that have more in common with product advertising than with any kind of life that our parents, let alone our grandparents, would recognise. It’s interesting to me how many people voluntarily take their cue from corporations, and turn their private lives in to a commodity. It’s fascinating and sometimes quite odd, but I don’t find it frightening. I’m offering up a mirror without the ‘black’

You mention your fascination with the bathroom selfie, which is reflected in your work ‘Felt Cute’ – this idea of a private space being turned into a theatrical spectacle that is the broadcast via online platforms – are you actively commenting on a contemporary phenomenon?

A contemporary phenomenon, yes; but an age-old need, I think.  I’m trying to address the psychology behind it.  For me these studies communicate a sense of the forlorn; for others the atmosphere might produce an altogether different emotion. However you see them, I hope that they hold your attention long enough to consider the subject behind these meme like images. They are, I hope, not without a good dose of humor, too. It also felt quite fitting not to portray the subjects’ features in these, precisely because of that meme quality they have.

As you mention above, you have described your work as ‘meme like images’ can you explain what you mean by this?

I meant this specifically in relation to the bathroom selfie phenomenon, as they all simulate each other, but with small variations.

What are you planning to work on for the rest of 2018?

A few too many things. I’m trying to get some new work together for a show. I have a commission to make a work for a collector in Belgium. And I am in conversation with the artist Bruce McLean about a ceramic project he has in mind. I am also considering applying to the RA Schools.